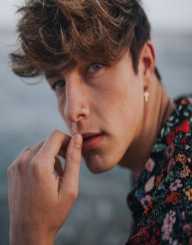 Justin Drew Blake was born on February 1, 2000, in Minnesota, United States of America. He was brought alongside two siblings, Danny and Jacob. He has a YouTube Channel with his friend Damon known as ‘Justin and Damon.’ He also has his own YouTube Channel known as ‘Justin Drew Blake.’ He had sweaters and T-shirts plus other merchandise in his name.

Justin Drew Blake joined social media when he was just a nobody but an ordinary boy. He had an impoverished social life in school as some of the students hated him. He is a transgender, and so he had difficulty in adjusting to school. He was unable to come out to his friends and classmates about his condition. His teachers knew of his condition. He joined social media and opened up about his gender. His posts garnered him supporters and well-wishers. His father helped him a lot in opening up about his condition to the people around him. He started accepting his sexuality, and he came out even more thus his popularity increased.

Justin Drew Blake also runs a Vlogging Channel where he Vlogs about his experiences as a transgender. His classmates were not happy with him for having not revealed his sexuality to them. They criticized him that he ended up taking online classes.  He later transferred to another school where he first opened up about his sexuality to his new classmates.

Justin Drew Blake was in a relationship with Raegan Beast from 2016. They broke up in 2017. He has many pets that he loves spending time with. He is also obsessed with dying his hair with different colors. He enjoys listening to country music, and he sings as well.