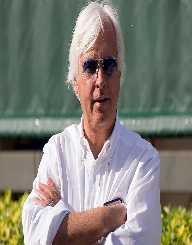 Bob Baffert, was born 13th January 1953, to Bill Baffert Sr., and his wife, Ellie. He was born in Nogales, Arizona, in the United States. His family lived on a ranch, raising livestock. Bob Baffert's father bought some Quarter Horses when; Bob Baffert, was ten years old, and Baffert used to race them around the farm on a dirt track.

Bob Baffert, moved to California in the 1980s to work at Los Alamitos Race Course. It was at this time that he started training Thoroughbreds. In 1997 and 1998, Bob Baffert trained the horses that won both the Kentucky Derby and the Preakness Stakes. He was the first trainer in history to win both races back-to-back.

Bob Baffert, has won many awards and honors. He has won American Champion 17 times in various categories. He has won the Eclipse Award for Outstanding Trainer four times, and he was inducted into the U.S. Racing Hall of Fame in 2009.

Bob Baffert's; first wife was Sherry, and the couple had four children together.

After divorcing Sherry, Bob Baffert married Jill Moss in 2002. Moss had been a television reporter. They have a son together.

Bob Baffert, supports various charities specifically to do with the racing industry. The Thoroughbred Aftercare Alliance, Old Friends Equine, and the Permanently Disabled Jockey’s Fund have all been beneficiaries of substantial donations, as have various other charities.