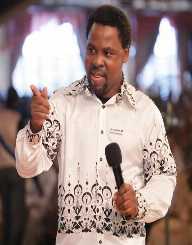 Temitope Balogun Joshua was born 12th June 1963, in Nigeria. As a youngster, Temitope Balogun Joshua went to St. Stephen’s Anglican Primary School between 1971 and 1977, but that was where his schooling ended. He didn’t go to high school. Due to his love of the Bible, he was called ‘small pastor’ at school. He was the leader of Scripture Union when he was in school, and ran Bible studies for the local children.

After school, Temitope Balogun Joshua had various casual jobs. He also tried to join the military, but his train broke down on the way to his interview, so he missed out.

Temitope Balogun Joshua founded The Synagogue, Church of All Nations, in Nigeria. The organization also runs the Emmanuel TV television station, which originates from Lagos. T. B. Joshua is a self-proclaimed messenger of God. There are claims of miracle healings in his church, which probably accounts for some of the popularity.

T. B. Joshua is a major influence throughout Africa. He has over 2.5 million followers on Facebook and around 500,000 subscribers on YouTube. Temitope Balogun Joshua’s organization is lauded as the largest tourist attraction in Nigeria, with a reported two million visitors each year.

He doesn’t do much international travel, but T. B. Joshua has conducted crusades in several countries, including Mexico, Peru, Columbia, Singapore, and Australia. He has also been to Israel to receive one of his humanitarian awards.

T. B. Joshua has written four books: The Mirror, The Step Between You and the Cure, Daily Time With God, and What the Future Holds.

T. B. Joshua has been very generous in his humanitarian work.

When Haiti had their earthquake in 2010, T. B. Joshua provided medical and humanitarian staff to help in the affected area, calling the field hospital Clinique Emmanuel. He has also supported India, Ghana, and the Philippines, as well as Ecuador in times of need.

T. B. Joshua has also made large donations to the police forces of Nigeria, Ghana, and Columbia.

Temitope Balogun Joshua is certainly not without his critics and controversy.

The Christian Association of Nigeria and the Pentecostal Fellowship of Nigeria have both confirmed that Joshua is not a member. Both associations have denounced him and called him an imposter.

The Cameroon government blacklisted T. B. Joshua in 2010, and when word got out he was to visit Zimbabwe in 2012, many pastors and politicians strongly objected. There was also controversy in 2014 when one of the guesthouses at the organization collapsed. It killed approximately 115 people, mostly South Africans.

When media reports are made in relation to Joshua’s wealth, whether it is his net worth, or to report the purchase of a private jet, Joshua is always very quick to denounce such reports.

Temitope Balogun Joshua was awarded an Officer of the Order of the Federal Republic by the Nigerian government in 2008, for his humanitarian work.

He has also received other awards for his humanitarian work and has been recognized as one of the most 50 influential people in Africa by several African publications.

Temitope Balogun Joshua is married to Evelyn, and they have three children.