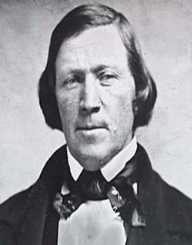 Brigham Young was a leader in the Mormon church. He was the successor to Joseph Smith, the originator of the religion. Young was viewed by Mormon followers as the “American Moses” for leading them to Salt Lake City, Utah. They considered it to be their promised land. He was a proponent of polygamy, which was deemed to be controversial even then.

Brigham Young was born in Whitingham, Vermont on June 1, 1801. His father was John Young, and his mother was Abigail “Nabby” Howe. Young was said to have had only 11 days of formal education. He worked as a blacksmith, carpenter, joiner, painter, and glazier before joining the Mormon church in 1832. He became a missionary in Upper Canada, and then he and other Mormons founded a community in Kirtland, Ohio.


Leadership in the Mormon Church

Brigham Young was made a member of the first Quorum of the Twelve Apostles in 1835. As part of his leadership duties, he was responsible for spreading Mormonism to the United Kingdom.

Joseph Smith, the founder of the Mormon religion, was in jail pending trial for treason when he was killed by an angry mob in 1844. This power vacuum left the church unsettled. There were arguments as to who would take Smith’s place as the church president. The primary dispute settled between a man named Sidney Rigdon and Brigham Young.

Rigdon claimed that no one could take the place of their prophet. No one could be president in his place. Instead, there should be a “protector.” Young claimed that Smith had said the Quorum of the Twelve Apostles was equal to the power of the president; therefore, the leadership should come from there.

Rigdon left to form his branch of the church, and Brigham Young became the next president of the Mormon church in 1847. From that point on, a new procedure for choosing a successor had been established.

Conflicts with authorities and others led Brigham Young to move the congregation out West. They settled in what is now Utah. Then, it was part of Mexico. He organized the trek, stopping at Winter Quarters, Nebraska in 1846, and making a final stop at Salt Lake Valley in 1847. By the time they reached the valley, the territory was now in American hands after the war with Mexico. This was not made official until 1848, however.

President Millard Fillmore appointed Brigham Young as the first governor of the territory and superintendent of American Indian affairs in 1851. Young oversaw the creation of forts, roads, bridges, and irrigation projects. He also organised a militia, made peace treaties with Native Americans, and supported the construction of the First Transcontinental Railroad.

Lastly, in his duties as governor, he established the legislature and the capital city of the territory. In part, these accomplishments were a part of his political position, but they were also done to further his religion’s progress out West. Much later, in 1875, Young created a branch of his University of Deseret in Provo. Later, the school established its own identity and was called Brigham Young Academy. It is known today as Brigham Young University.

Brigham Young did not step down gracefully as governor. President James Buchanan received complaints of widespread obstruction of federal officials in Utah. The president decided to replace Young with a secular governor. The new governor was sent, along with troops should the situation not go smoothly. Young did not take the news well. After a protracted battle, Young arranged to burn down Salt Lake City and move his people to Mexico. Fortunately, he changed his mind in the end. He stepped down, and Buchanan eventually pardoned him.

One of the core doctrines of Mormonism, according to Brigham Young, was the godhood of Adam. He claimed that Adam was our God, but that he and Eve ate the fruit of the tree in the Garden of Eden. This made them mortal. They gave birth to the race of man and returned to heaven where Adam is the god of this world. Besides, Adam was the physical father of Jesus.

Another of Young’s teachings had to do with race. He taught that men of African descent were the descendants of Cain. According to him, their skin color was the “mark of Cain.” Previously, Joseph Smith had treated them as equals when it came to the priesthood. Young changed this. He banned black men from the priesthood (women were never allowed into the priesthood) because of their association with Cain. Young went so far as to place a death penalty on interracial couples who had children. These teachings were not reversed until 1978.

Brigham Young is better known for the practice of polygamy than his predecessor, Joseph Smith because Young was the first head of the church to make a public statement about the practice. Polygamy is the practice of having more than one spouse (in this case, wife). It is said that Brigham Young had 55 wives and 56 children.