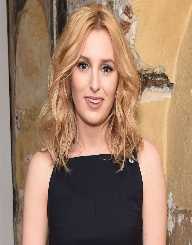 Ms. Laura Carmichael was born on July 16, 1986, as Laura Elizabeth Carmichael.  Her place of birth is Southampton, England, to her parents, Sarah and Andy Carmichael.  Sarah, her mother, was a radiographer and her father, Andy, was a software consultant.  She is the second of three daughters.  Laura's sisters' names are Amy and Olivia.  Amy works for a software company, and Olivia is a charity fundraiser with NHS.  Growing up, she attends Shirley Junior School, the Mountbatten School, and Peter Symonds College, Winchester, Hampshire, England from which she graduated in 2007.

Before she hit it big with Downtown Abbey, Laura worked in various jobs to support herself. She was a teacher's assistant, a nanny, and a receptionist. She was a secretary, as well.  Three years after college, she auditioned for a role in the program Downtown Abbey after being asked by the director of the series to go on that audition.  Laura won the part of Lady Edith Crawley in the series. Laura was her, Lady Edith from 2010 through 2015.  For her role, she received worldwide recognition.

Previous to that plum role, she was the star in Reasons for Living, which was part of the 2009 Scratch Festival at Batterson Arts Center. In 2011, she got a part in Tinker Soldier Spy. A short three years later, she got the role of Henriette in the 2014 film of Madame Bovary. Laura did all this while working on Downtown Abbey.  In 2013, she played Fitzrovia, in the "Radio Hour."  In her final year with Downtown Abbey, 2015, she acts in British Black Comedy "Burn, Burn, Burn."  The following year, in 2016, Laura starred in various ventures such as ITV's series "Marcella" and "United Kingdom," as well as, the Maids" and "Plenty."

Laura has won various awards over the years.  In chronological order, she has won the following awards:

Laura also has a few nominations for her acting that did not end up in a win for her but a recognition of her growing talent.

And she still has more to go. Currently, Laura lives in Camden, London, England. She is 37 years of age, and ready to work and win some more awards.  Although there isn't much listed about her personal life, there is a plethora of information about her acting career and her life before hitting it big in her acting career.

As with many who now reside in the United Kingdom, she is facing what her life will be like now that England wants to leave the European Union.  A glance through her social media shows her political activity, and her good works resume. But it also shows what she is currently working on both professionally and personally. Expect to see a hopefully long career from Elizabeth Carmichael.