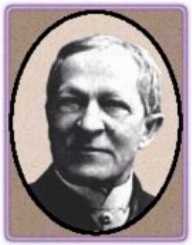 Levi Parsons Morton was born on May 16, 1824, in Shoreham, Vermont. His father Reverend Daniel Oliver Morton was a Congregational minister. Morton had an older brother, who became the Mayor of Toledo, Ohio.

In 1832, the Morton family moved to Springfield, Vermont, where his father took a position as the Congregational church minister. Levi attended the local school and was described by his peers as the leader of all typical schoolboy affairs. Morton later attended the Shoreham Academy.

After finishing school, Levi P. Morton began working as a clerk in a general store in Enfield, Massachusetts. He also worked as a teacher in Boscawen, New Hampshire and was a merchant in Hanover, New Hampshire. Morton then moved to Boston and began working at the Beebe & Co importing company.

After his initial pursuits, Levi P. Morton moved to New York and settled there. He entered the dry goods business and became a very successful cotton broker. He founded the Moron, Bliss & Co, and established himself as one of the top investment bankers in the country. He first tried out to enter politics in 1876, when he ran for a seat in the 45th Congress. Despite that fact that he was not elected to Congress, Morton became the honorary commissioner to the Paris Exhibition in 1878.

Levi P. Morton was elected to the 46th and 47th Congress from the Republican party, as the representative of Manhattan. He resigned from his seat in 1881, when the Republican presidential nominee, James A. Garfield asked Morton to be his running mate for the presidential election. At the time, Morton was a loyal supporter of Senator Roscoe Conkling, who ran the campaign of Ulysses S. Grant. Conkling advised Morton to decline the offer, and Morton took the advice. In the end, Garfield was elected together with his running mate Chester A. Arthur.

After Garfield was elected, Levi P. Morton asked to be appointed as an ambassador either to France or the United Kingdom. In 1881, he became the U.S. Minister Plenipotentiary to France and served in this capacity until 1885. In France, Morton became very popular and helped the commercial relations between both countries to improve. On October 24, 1881, Morton placed the first river in the Statue of Liberty’s construction.

During his time in the office, Levi P. Morton attempted to pass the Lodge Bill, which enforced the voting rights of the blacks in the South. The bill eventually failed, and the president blamed it on Morton. Before the 1892 election, Morton decided not to run for the second term as vice president.

After leaving the office as Vice President, Levi P. Morton continued his political career, and in 1895, he was elected the Governor of New York. He served in this capacity until 1896. Morton was considered for the Republican candidate in 1896 Presidential Election, but the party eventually chose William McKinley. After his term as the governor ended, Morton left the politics and became a real estate investor.

During the winter of 1919, Levi P. Morton became ill and developed severe bronchitis. He eventually got ill with pneumonia, which ended his life. He died on May 16, 1920, on his 96th birthday.