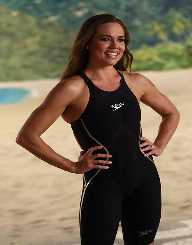 Natalie Anne Coughlin Hall’s father was a police officer, who also worked as a paralegal. Natalie was born in Vallejo in the US state of California on August 23rd, 1982.Natalie began active competitions in swimming when she was aged 6. She went on to join Terrapins swim team as a member. Natalie was reputed to be all out on speed from the coach’s view. Natalie Anne Coughlin had a recognizable passion for swimming, and she pursued the sport all vigor and support of her family. She showed excellent willpower and started out on breaking records early in her career. Natalie Anne Coughlin zeal to become a swimmer of world-class repute was so evident early in her life, and by the time Natalie competed in her first world championship, she created a world record in 100 meters breaststroke by completing ahead of the field in less than a minute.

In her high school, Natalie Anne Coughlin was one of the top young swimmers and was impaired by a shoulder injury in the year 1999. Natalie was however out of competitions as a result. Natalie used the layoff to strengthen her powerful kicks during practice sessions. Natalie Anne Coughlin made it to University of California at Berkeley and while in school, she proved that she was fully recuperated from her shoulder injuries.

It was at the 2004 Athens Olympics that  Natalie Anne Coughlin proved her worth in the 100 meters backstroke. Natalie was also exceptional with the relay team in the 800 meters freestyle race. Natalie's r fellow relay teammates were Dara Torres, Lacey Nymeyer, and Lacey Nymeyer. They set a new world record also for the event. Natalie graduated from the University of California a year after the Athens Olympics in 2005.She bagged a bachelor’s degree in psychology.

This performance gave Natalie Anne Coughlin a spot in the American team for the London Olympics in 2012. Anne also came up with her 12th medal during the Olympics and was able to tie the records of Dara Torres and Jenny Thompson for the most medals in the Olympics for a U.S athlete.

Natalie Anne Coughlin settled for other aspects of life after the Beijing Olympics. Anne competed in 2009 in the TV show, “Dancing with the Stars.” This was the chance to show her fans what else she could do.
She also appeared on the Iron Chef America show as a judge and this time, it was all about coking and not swimming. Anne authored a book with Michael Silver, and it was titled Golden Girl. The book was based on the life events of Natalie Coughlin.

Natalie Anne Coughlin's qualification in the year 1998 for the Summer National championships was a record-breaking one. This was recorded as the first time a high school student made it to the nationals in 14 events. Natalie Anne Coughlin was the winner of 12 National Collegiate Athletic Association championships under the tutelage of Teri McKeever while at Berkeley. Natalie competed as a member of the diving and swimming team that Terri mentored.

Anne got the NCAA nod as Swimmer of the Year for the three years to 2003. Apart from this, she also got Sports Illustrated magazine award as the college Female Athlete of the Year.

Natalie Anne Coughlin is noted for her inspiring devotion and apparent dedication to the swimming profession. She displayed rare courage at various times and thus made it to the nadir of her game. Starting out early in life to hug the limelight and set championship records is only possible when there is unalloyed commitment.

Natalie Anne Coughlin is also noted to have erased her earlier record in the 100 meters backstroke event at the World Aquatic Championships held in 2007. She was able to shatter her earlier 2002 record with a 59.44 performance.
During the 2008 Olympics, Anne hauled six medals, and this was a record in a singular Olympic game by any female competitor. Natalie also emerged once as the World Swimmer of the Year Award winner.

Natalie got married in April 2009 to Ethan Hall. Ethan and Natalie had dated for a long time, and they hooked up when Ethan was coaching Crow Canyon Sharks. The wedding took place at Napa Valley in the state of California.