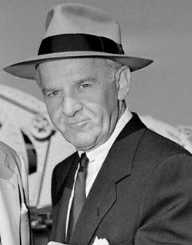 The entertainment industry is one of the noticeable fields around the globe. Walter Winchell knew the fun he had when he got a seat as one of the remarkable news anchor and radio personality. During his day, in the 1920s to 1950s Walter’s work was always on the front line. Not only is he remembered for his peppery gossip but he unveiled tremendously in his work. He wasn’t afraid of the highest personnel’s. His work included giving the fourth estate what they deserved, and it was nothing else than pure truth. Unlike other commentators, Walter Winchell was a straightforward man. He wasn’t born with a silver spoon in his mouth, but he died knowing that he has changed the universe and beyond. Read further to understand more about his early and later achievements.

As a fervent journalist, Walter Winchell believed that each of his guest answers’ should lead to another question. That is what journalism is all about. Throughout his career, there is no point that Walter gave up on his natural born talent. He perfectly knew how to evaluate his goals as well as setting new ones. With his inspirational quotes, he was able to achieve the unachievable. He had an intense passion for his work. This gave him a chance to pour his whole heart and soul into a given story. Walter’s personality was characterized by his creativity, vigor, and ambition. In other words, he was one of the greatest assets in television and radio industry. In everything he did, he displayed his charm and creativity to the end. This type of quality earned him loyal friends, but it is his ambition and robustness that most people admired.

On April 7, 1897, Walter Winchell was first seen in the world in New York City, the U.S. His mother was called Jennie Bakst while his father was known as Jacob Winchell. Walter loved to play with his younger sibling, Algernon. Even then Walter didn’t have a luxurious childhood. His father’s laziness and sickly attitude made them live a wanting life. Walter joined a school where he later dropped in the middle to help his mother with daily upkeep. He once served at the butcher and newspaper shop. He did everything he could just to save his family’s situation. In the middle of all, he met up with friends called Trio where they opted to form a band. It was here that his group went to perform at Vaudeville show that was organized by Gus Edwards.

While still on the verge of searching his true-self, Walter Winchell advertised his skills by posting short notes on bulletin boards. In the mid of 1920, he landed at a weekly newspaper company called Vaudeville News. His passion in the field led him into the entertainment world. The good thing is that he knew how to attract more audience, and that is what journalism is all about.

After leaving Vaudeville News in 1924, Walter Winchell launched his newspaper called The New York Evening Graphic. His apt skill and determination made him excel further unlike another journalist in the field. He also possesses a nonchalant attitude that gave him a chance to exploit further. His rose to fame when he wrote and published a short article titled Mainly about Mainstreeters. In 1929 he landed a position at New York Daily Mirror. It was here that he turned into a famous author. He had enough information to leak out both embarrassing and exciting details about prominent people. He loved to talk about entertainment, social issues, and government. Without further ado, later turned into an influential person and no one came to expose him. He was a powerful and famous man.

Early in 1930, he launched another job in a CBS Affiliate Company called WABC in NY. It was here that he appeared in a fifteen-minute show called Saks on Broadway. After two years, he served as a host in a compelling show The Jergens Journal.

In the mid of 1930s, he earned more fame and publicity when he covered a series of news such as kidnapping and government deeds. Over fifty million people read Walter's write-ups. He also became an active supporter of Franklin Roosevelt’s office where he criticized Adolf Hitler’s organization. In the process, he once served as a government spokesman for Roosevelt government.

Before the end of the World War II, Walter Winchell became an active supporter of African-America civil rights. His no-nonsense attitude made him attack unions such as the National Maritime Union. He convinced the public that several Communists ran the union. Other reporters such as Fred Allen and Jack Benny didn’t see Walter’s determination. In 1948 he was named as the most top rated radio presenter in the world.

In all, Walter’s career began to weaken day by day. In 1963 New York Daily Mirror newspaper closed down due to lack of enough resources. This is where he ended his career and soon paved the way for his own life and not the public fame. His last piece of work was called The Untouchables on the ABC television network that only lasted for four years. In 1969 Walter announced his retirement due to his health and family issues.

In 1919 Walter Winchell married Rita Greene, but they parted ways after several years of courtship. He then visited his other partner called June Magee with whom he had a daughter named Walda. He divorced his first wife, Greene early in 1928. He and Magee were blessed with three more children, but they didn’t manage to see their teenage life. In the mid of 1968 his dearest son, Walter Jr committed suicide. After two years his wife Magee died due to a heart condition.

For two years Walter Winchell spent most of his time in a prestigious hotel in Los Angeles. Walter battled with prostate cancer where he passed on February 20 in 1972 at 74 years of age. Walter Winchell will forever be remembered as a great person who acted as the primary voice of the oppressed.