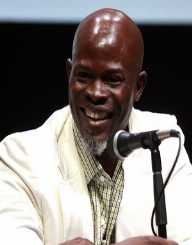 Actor Djimon Hounsou was born on the 24 April 1964 in Cotonou, Benin in West Africa to Pierre and Albertine Housou.

After moving to France with his older brother when he was 13, Djimon Hounsou dropped out of school.

Initially living rough in France, Djimon Hounsou was scouted by a French designer and subsequently had a successful career as a model. He was then offered a role in the film Without You I’m Nothing (1990) which led to his role in the Spielberg film Amistad (1997) which established his career. He went on to appear in Gladiator (2000), In America (2003), Blood Diamonds (2006), Guardians of the Galaxy (2014) and Furious 7 (2016).

Hounsou was a Calvin Klein model during 2007.

Djimon Hounsou was in a long-term relationship with model Kimora Lee Simmons, and the couple had a son together in 2009. The couple separated in late 2012.