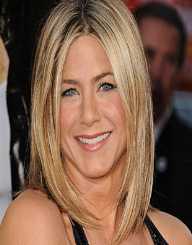 Jennifer Aniston's real name is Jennifer Joanna Aniston. She was born on February 11th, 1969. She is a famous American actress that was born in a kinfolk of actors. With this in mind, she made it her dream to one day become an outstanding individual.

With the help of her parents, Aniston tried her best to earn a top spot position in the film industry. To her frustration, things did not work out fine during her first few years. This was not until American audience fell in love with her through the NBC TV sitcom Friends. She played Rachael Green. This sitcom ran for ten seasons which gained her nationwide popularity.

Jennifer Aniston was born in a small town in California called Sherman Oaks. She is the daughter of actor and actresses John Aniston and Nancy Dow. Both her father and mother were from different descents. Her father was a Greek while her mother was an American native born in the New York City. Her parents appeared on TV during the late 80s. Jennifer Aniston was active in drama right from the point she joined Fiorello H. LaGuardia High School of Music & Art and Performing Arts. During her high school era, she was an active member of the drama club.

Her early career was not smooth for Jennifer Aniston. In the period between 1988 and 1993, she engaged in some jobs that would earn her something. During this period, she managed to work with “Off-Broadway” productions in showcasing shows such as Dancing on Checker's Grave and For Dear Life. Other part-time jobs that she did were working as a telemarketer, bike messenger, and waitress. Later in 1989, Aniston was featured as a spokesmodel by appearing in The Howard Stern Show.

Aniston’s breakthrough came about when she landed an essential role in the famous NBC sitcom Friends. It from here that she gained popularity among American viewers as the show lasted for ten seasons. She acted as Rachael Green for ten years in Friends. This was a significant achievement in her career as she was honored with a Golden Globe award. In addition to this, she also won an Emmy Award for the same show on Friends.This sitcom came to an end in 2004.

One impressive aspect about Jennifer Aniston is that she never despised any role given to her in her film career. This made her star in both high and low budget films. In 2002 and 2003, she was featured in The Good Girl and Bruce Almighty respectively. She was also a cast in the movie Office Space. Movies that she acted in the 2004 era were Along Came Polly, Derailed, and Rumor Have It. Later in 2006, she was also included in The Break-Up.

Two years later, she was seen back on screen as she appeared in Marley & Me - 2008. This movie hit the headlines with the number of sales ($14Million) that it made. This made the film to be ranked as Box Office number 1. A year later, Jennifer Aniston also made a hit with the movie He's Just Not That Into You - 2009. The film also gained number 1 rankings at the Box Office for its numerous sales in its weekend opening.

Recently, Jennifer Aniston has featured in romantic comedies which also gain her recognition in the film industry. Horrible Bosses (2011) was one of the comics that she starred in. Similarly, she went on to feature in We’re the Millers and Horrible Bosses 2 in 2013 and 2014 respectively.

In 2000, Jennifer Aniston was married to Brad Pitt who is also a famous actor. Their marriage came to an end after rumors that Pitt was having an affair with Angelina Jolie. In 2011, she dated Justin Theroux before they got married in 2015.