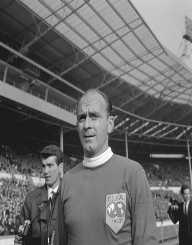 Argentina football great and team manager Alfredo Di Stefano was born on the 4 July 1926 in Buenos Aires, Argentina. His paternal grandfather had immigrated to Argentina from Italy, and his mother was of French/Irish descent

Alfredo Di Stefano joined River Plate in Argentina where he began his football career in 1943.

Although loaned to another club, Di Stefano was back with River Plate by 1947. In 1949 Di Stefano joined Millonarios in the Columbian league. During this stage of his career, he won six league titles.

Alfredo Di Stefano made his debut with Real Madrid on the 23 September 1953 playing against the Nancy Football Club of France. Real Madrid won 2-4 with Stefano scoring the final goal of the match. From the time Stefano joined Real Madrid the team won eight out of the following eleven league titles and one Copa del Generalissimo. Stefano also had the distinction of being the top scorer in the league in five championships. Di Stefano was with Real Madrid from 1953 until 1964. He then joined Espanyol (1964-1966) and retired from playing professionally on the 3 April 1966.

Alfredo Di Stefano was selected as a member of the Spanish team in 1957.  His first game was playing against the Dutch, and he scored a hat-trick. Spain won the game 5-1. All up he played six times with the Argentine national team and thirty-one with the Spanish.

In 1950 he married Sara Freites, and they had six children together, remaining married until her death in December 2012.  Alfredo Di Stefano died on a heart attack on the 7 July 2014. Di Stefano had spent his final years living in Spain.

Stefano was named Honorary President of Real Madrid in 2000. The Alfredo di Stefano stadium where Real Madrid train is named in his honor.

A Venezuelan revolutionary group, FALN, kidnapped Di Stefan from the Potomac Hotel in Caracas on the 24 August 1963. Alfredo Di Stefano was unharmed and later released.