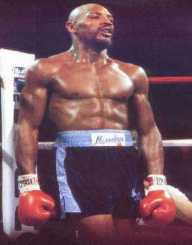 Marvellous Marvin Hagler, born Marvin Nathaniel Hagler, is a former American professional boxer and former World Middleweight Champion. Born on May 23, 1954, his professional career spanned from 1973 to 1987 and was known to have one of the toughest chin in boxing. From 1980 to 1987, Hagler remained as the undisputed middleweight champion of the world. To maintain his reign, he made twelve title defences achieving a knockout rate of 78%. This makes him the only undisputed middleweight champion with the highest knockout percentage.

The twelve consecutive defences within six years and seven months also make Marvin Hagler's the second-longest unified championship reign in the history of boxing. He is just second to Tony Zale who reigned during the Second World War. In 1982, he legally changed his name to “Marvellous Marvin Hagler” as announcers did not mostly call him “Marvellous” which was then his nickname. His reign ended when Sugar Ray Leonard defeated him by in a controversial split decision.

Marvellous Marvin Hagler achieved greatness in boxing and was awarded and honoured accordingly. He was inducted into the International Boxing Hall of Fame and the World Boxing Hall of Fame in 1993. He is 6th on the International Boxing Research Organization list of greatest middleweight boxers of all time. After his boxing career, Hagler went into acting appearing in some action films.

Marvellous Marvin Hagler was born on May 23, 1954, in Newark, New Jersey. He spent his early years in the tenement section of Newark being raised solely by his mother. The family later moved to Brockton, Massachusetts after the Newark Riot of July 12–17, 1967. About 26 people died, and properties worth $11 million including Hagler’s family tenement were destroyed in that riot. At 9th grade, he dropped out of school to engage in construction works.

Marvellous Marvin Hagler gained interest in boxing after a visit to a gym owned by the brothers Pat and Goody Petronelli. The brothers will later become Hagler’s trainers and managers. As an amateur boxer, he won 57 fights before going into the 165-pound weight division at the Amateur Atlantic Union nationals in 1973. He won that title in a bout against Terry Dobbs.

Marvellous Marvin Hagler had an aggressive approach to his bouts and made sure he physically destroyed opponents with stiff punches. After amateur, he went into the middleweight division, where he remained for many years before getting a title bout. This was because he could not get a high profile boxer willing to fight him. During this period Joe Frazier said to him “You have three strikes against you, "You're black, you're a southpaw, and you're good.”

To get a fight, Marvin Hagler had to travel to his opponent’s hometown. His breakthrough was in a fight against Willie 'the Worm' Monroe where he was given a two-week notice for the fight. He lost the first match but won the rematch with a knockout at the 12 round. In the third bout, Hagler knocked out Monroe in the second round. His next top profile opponent was Sugar Ray Seales a 1972 Olympic gold medallist. They fought three times with two going in favour of Hagler and one draw.

Hagler’s first title fight was against World Middleweight Champion Vito Antuofermo in 1979 at the Caesars Palace in Las Vegas. The fight ended in a controversial draw with Antuofermo retaining the title. Hagler had the chance to fight for the title again after Antuofermo lost the title to British Boxer Alan Minter.

Marvin Hagler challenged Minter for the title at the Wembley Arena. Minter is reported to have said "No black man is going to take my title" which he later denied. At the end of the fight, Hagler became the new World Middle Weight Champion and would retain the title for more than six years. Hagler was able to defend the title against the likes of Fulgencio Obelmejias of Venezuela, Antuofermo, Roberto Duran, Juan Roldan of Argentina, Thomas Hearns and JohnMugabi of Uganda.

Marvin Hagler was yet to meet his real match in Sugar Ray Leonard. Leonard returned from his three-year retirement to fight Hagler. Many conditions were put in place for the fight to come on. The ring size was fixed at 22x22 ft. and the fight travelled at 12 rounds instead of 15. The fight was scheduled on April 6, 1987, at the Caesars Palace in Las Vegas.

The fiercely contested bout ended with Leonard throwing 629 punches and landing 306, while Hagler threw 792 and landed 291. Leonard was announced the winner in a split decision. That decision has been disputed until now. According to Hagler, Leonard told him, "You beat me man" as they embraced after the fight. However, Leonard denied it claiming he rather said,"You're a great champion."

Feeling cheated, Marvin Hagler, fell for alcohol and that affected his marriage. Things became worse when Leonard denied him of a rematch and retired. Hagler also retired in 1988, after the unsuccessful call for a rematch. In 1990, Leonard decided to grant Hagler the rematch, but he also turned it down. The bout would have earned Hagler $15 million.

After retiring from boxing, Marvellous Marvin Hagler took on acting starring in some actions films. He played a role of a US Marine in Indio 1 & 2. His next movie was in Virtual Weapon, 1996, starring alongside Giselle Blondet. He also did some boxing commentaries for the British television.

Marvellous Marvin Hagler has married twice. His first wife was Bertha with whom he had five child renCharelle, Celeste, James, Marvin, Jr., and Gentry. His second wife is an Italian woman called Kay. They married in Pioltello, Italy in 2000. He currently lives in Milan.