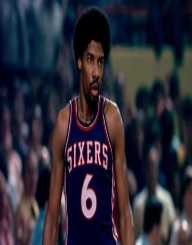 Julius Erving was born on February 22nd, 1950 in Roosevelt, New York in the United States. He first played for Virginia Squires before later joining New York Nets in 1973. He proved to be a major asset for the New York Nets as he helped them in winning ABA championships two times in 1974 and 1976. He later went on to play for Philadelphia 76ers in the period from 1976 to 1987. He also continued with his exceptional performance helping his team perform well at world championships. Erving retired from professional basketball in 1987. To this point, he had featured in over 800 games with an average scoring rate of 22 points in every game.

Julius Winfield Erving II was born on February 22nd, in 1950. He is famously identified as Dr. J by his basketball fans. He rose to fame for his prowess in court for a career that lasted 16 years. He began playing basketball in high school and later on continued with his talent in college.

While schooling at Roosevelt High School, Julius Erving was an essential part of the school for being a member of the basketball team. It is at this stage where Erving acquired the nickname Dr. J from one of his friends called Leon Saunders.

After completing his high school education, in 1968, Erving joined the University of Massachusetts. In the first two seasons that he played, he scored on average 26.3 points. Also, he had averaged 20.2 rebounds in every game he played. His records earned him recognition as one of the six basketball players to average more than 20 rebounds and 20 points in every game. Playing as a free agent, he joined ABA and played for the Squires in 1971.
Soon, Erving left college with the vision of fighting for his dreams. After that, he graduated from the University of Massachusetts Amherst with a bachelor’s degree. Besides this, he was also awarded an honorary degree from the same university later on in his career.

Julius Erving began his ABA career in 1971 while playing for the Virginia Squires. Because he was talented, he quickly transitioned and became a pro. In his first year of play, he averaged over 27 points in every game. This made him be listed as part of the ABA All-Rookie Team and All-ABA Second Team. He went on to complete his contract with the Squires while playing in the 1972 -1973 season. He then signed a contract with New York Nets which proved to be a good investment. He helped his team clinch trophies in 1974 and 1976. Apart from this, he was bestowed with Most Valuable Player Award for both seasons when his team emerged victoriously.

Erving admiration not only came from the many scores that he earned his team, but his style of play was also unique, and it made his fans fall in love with him. He was respected for his powerful slam-dunks and jump shots. When ABA’s league was ending in 1976, Erving was the winner in the ABA Slam Dunk competition that year. This was the first dunk competition that had ever been hosted in the basketball game.

After capping his ABA career in 1976, Julius Erving was sold to Philadelphia 76ers at a price tag of $3 million. He continued with his extraordinary performance, helping his team win titles year after year. The first year of play with the Philadelphia76ers, his team reached the finals before being defeated by Portland Trail Blazers. Erving aided his team reach semi-finals for two consecutive times, and in 1980, his team was back at the finals. They however lost in the finals again to Los Angeles Lakers. Regardless of the loss that his team suffered, Erving made headlines in Game 4 when he scored in a move that would later be famously known as the “Baseline Move.” Erving retired from professional basketball in 1987. To this point, he had played over 800 basketball games. In both his ABA and NBA career, he scored over 30, 000 points.

Years later, in 1993, Erving earned himself a spot at the Naismith Memorial Basketball Hall of Fame.

Julius Erving is a Christian by religion. He was in a long-term marriage relationship to Turquoise Erving since 1972, and it ended in 2003. This relationship earned the couple four children. Among them was their son Cory who drowned in 2000. In 1979, he was romantically involved with Samantha Stevenson, a sportswriter. This relationship led to the birth of Alexandra Stevenson, a famed tennis player.