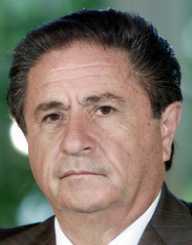 Eduardo Alberto Duhalde, an Argentinean politician, and a lawyer was born on October 5, 1941, in Lomas de Zamora, in the Greater Buenos Aires, to Don Tomas Gorostegui Duhalde and María Esther Maldonado. Very little information about his childhood, early life, and school education are available. He attended the University of Buenos Aires to study law. He graduated with a degree in law from the University in 1970.

In 1973, Duhalde was appointed Mayor of Lomas de Zamora by President Zuan Perón as part of his political reorganization. The Pasco Massacre saw large numbers of Zuan Perón followers, mostly youth, get killed in Lomas de Zamora. Argentine Anticommunist Alliance was blamed by Duhalde and his party for the massacre. In 1976, Duhalde was made to relinquish the post of Mayor during the National Reorganization Process undertaken by the Argentine coup d'état. Following the coup and his ouster, Duhalde started working as a real estate broker.

Eduardo Duhalde returned to active politics again in 1983 once democracy was restored in Argentina. In the ensuing general election, he was elected to the Parliament. His Justicialist Party (PJ) nominated him for the post of Mayor of Lomas de Zamora as a compromising formula between the factions engaged in the internal feud within the party.

Duhalde won by a narrow margin of only 700 votes in the face of a technical tie with the candidate of the Radical Civic Union (UCR), Horacio Devoy. In the election for the local legislature also, there was a tie with both PJ and UCR party winning 11 legislators each. In 1987, Duhalde was elected as the National Deputy and became the Vice President of the Argentine Chamber of Deputies. During the tenure, he set up a commission to fight drug addiction.

In the 1989 presidential election, Carlos Menem, governor of La Rioja, won the primary election for PJ with Duhalde as the Vice Presidential candidate under his ticket. They went on to win the general election. Eduardo Duhalde was not in favour of legislative work and instead preferred the work of the actual administration of a district. On the suggestion of Carlos Menem and on being assured of granting a hefty budget by him, Duhalde ran for the post of Governor of the Buenos Aires Province. On December 10, 1991, he took charge of the office of the Governor and held the position until December 10, 1999.

Duhalde’s intention to run for the Presidency in 1995 was thwarted by the incumbent President Carlos Menem as Menem promulgated the 1994 amendment of the Argentine Constitution, which allowed the later to run for a second presidential term. As Duhalde could not defeat Menem in the party primaries, he similarly promoted an amendment of the provincial constitution, which allowed him to seek a second gubernatorial term. Ultimately, both Menem and Duhalde won their respective second term for Presidency and Governorship in 1995.

Upon completion of the 1995 presidential election, Eduardo Duhalde announced his intention to run for the Presidency in the 1999 election, which was fiercely opposed by Carlos Menem. The incumbent President despite his term limitation launched a promotional campaign in his favour and named it "Menem '99'”. However, Menem had to back out after the Supreme Court ruling made his attempt to contest the presidency for the third time unconstitutional. Duhalde somehow managed to secure the nomination for the Presidency on behalf of his party amidst many controversies and allegations of corruption against him. He eventually lost the election defeated by the radical Fernando de la Rúa.

Two years later De la Rúa's government faced an economic crisis followed by 2001 riots. Fernando de la Rúa was compelled to resign alleging Duhalde organizing a coup d'état against the former. However, the economic crisis was seen as an exclusive result of keeping the peso-dollar parity despite the costs generated by it.

Néstor Kirchner succeeded Eduardo Duhalde on May 25, 2003. On December 23, 2009, Duhalde declared his intention to run for the Presidency in 2011 election. Duhalde contested on a Union Popular ticket in 2011 presidential elections and eventually lost to Cristina Fernández de Kirchner after the untimely death of Néstor Kirchner in October 2010.

Eduardo Duhalde worked as a swimming pool lifeguard before commencing his political career. He met Hilda González in 1970 during his stint as a lifeguard in a pool. They tied the nuptial knot the following year. The couple is blessed with five sons and seven grandsons. In San Vicente, Buenos Aires, Argentina, they have an ancestral country house, "Don Tomás," named in memory of Duhalde’s father, where they all stay together.

After the defeat in 2011 presidential elections, Duhalde retired from active politics. He is now in friendly terms with his one-time fierce political rival Carlos Menem and is comfortable with sharing common platforms during important events like the 2013 Papal inauguration of Pope Francis. They also met previously on such occasions during the funeral of Pope John Paul II in 2005. In 2010, during an interview with Noticias magazine, Duhalde disclosed a colonel’s attempt to get his support in a possible coup against the then President Raúl Alfonsín. Duhalde did not cooperate with Colonel and instead reported the incident directly to Alfonsín.