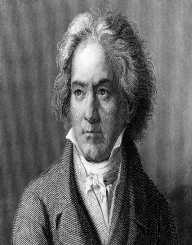 To many, Ludwig is the Shakespeare of Music. Ludwig van Beethoven was one of the greatest composers on earth. He seemed to be among the pioneers of the European culture of instrumental music. He is known for his critical contribution to the development of tonal music. Her last of hearing never hid his creativity. His deafness, however,restricts him from the social life but not his creativity.

Ludwig van Beethoven is regarded as a colossus of music despite his total deafness. His fame became unbeaten and had an influence on the shores. His style was enriched with the emotional power of romanticism. In fact, most of his work baffled his mates and still mystify others till now. His works are still sung and performed all over.

Ludwig van Beethoven was born on the 16th day of December 1770 to Johan Van and Maria Keverich of Bonn, Germany. His birth date has no genuine records. However, records showed that he was baptized on the 17th day of December. It was deduced that he would be born on the previous day because of the Catholic tradition of baptizing babies a day after birth. His father was a singer and his first teacher. Later he was trained by different great and eminent teachers. At 7, he performed for the first time in 1778 at age 7.

Ludwig van Beethoven learned composition in 1779 and published his first three Sonatas. In 1787, he returned from Vienna where he had gone to meet Mozart because of his mother’s illness. His mother later passed away as a result of that, and his father became an acute alcoholic. He later took up his brother’s financial need.

Ludwig van Beethoven had stayed in Vienna until his death, unmarried and yet lived with few trusted friends. He was known to have a connection with King Federick William of Perusia. He chose to pay him pension instead of the job offer he was given. He chose to be paid while he administered from his house. Thus, he became one of the foremost musicians to live independently off music income.  Before then, Ludwig van Beethoven had done a lot of things to earn him respect. He composed six string quartets between 1798 and 1800.

Ludwig van Beethoven later published this in 1801. He had however gained a lot of recognition as one of the most prolific young music composers after his first and second symphonies were published. Upon the completion of Piano Sonatas, it became one his most famous works. As at the end of 1800, many publishers and patrons then wanted to partner with him. It was his brother that helped in the smoothening of his relationship with the publishers.

HEALTH ISSUES AND EFFECT ON HIM

Ludwig van Beethoven confronted a serious health issue which affected his hearing. He was twenty-six years old when this sickness started. As time goes on, the hearing problem became an acute one. He contemplated committing suicide but was discouraged. As at 1815, he gave a public performance as a pianist. Due to his deafness, he had to converse with a set of people through his conversation books. This conversation book, however, became useful as his written document. It also serves as the source of his thought regarding his music. His secretary as well as his earliest biographer destroyed most of his conversation books and changed a few because he wanted an idealized version of his master biography to be seen by the people. His hearing defect affected his musical as well as social life seriously.

HIS DEATH AND LEGACY

Only a few know about his last work. They were said to be too advanced for both the professional and audience to decipher. He fell ill while coming from his brother’s house and passed away in the congregation of trusted friends on the 26th of March, 1827. He was Cremated near Vienna at Wahring Cemetary.

Till today, Ludwig van Beethoven is regarded as one of the greatest musical genii ever. His experiments and unique style. He was known to have developed his style and composed beautiful works in line with it.

Ludwig van Beethoven is credited with nine symphonies, numerous orchestral music pieces, incidental music, violin and piano concertos among others. He is known to have worked on Horn Sonatas, Cello Sonatas, Violin sonatas and a host of others.

Ludwig van Beethoven is so vast with his musical career that he was regarded as one of the musicians genii we had and composed over 600 beautiful pieces. Apart from this, he always opens his doors for other musicians to come in and learn.