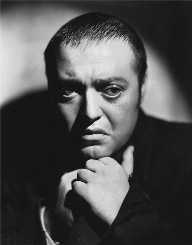 László Löwenstein known in showbiz as Peter Lorre was an American actor. Born on June 26, 1904, he began his acting career on stage in Vienna and later in Germany. With enough stage skills, he ventured into films, gaining popularity with his role as a serial killer in the German movie, M, 1931. In 1934, he made an English language film debut in The Man Who Knew Too Much, when he moved from Germany Great Britain. Lorre finally made it to Hollywood, where he featured many crime and mystery films.

Still acting as a killer, Peter Lorre played roles of Dr. Gogol in Mad Love, 1935 and Crime and Punishment, 1935 as Roderick Raskolnikov. He was signed to Warner Bros in 1941 and would work for them until 1946. His debut for Warner was The Maltese Falcon, 1941 alongside Sydney Greenstreet and Humphrey Bogart. His other films include with Casablanca, 1942, Arsenic and Old Lace, 1944, 20,000 League Under the Seat, 1954 and Casino Royale in 1953 among others.

Peter Lorre born László Löwenstein, was born on June 26, 1904, Rózsahegy in Liptóv County, Hungary (currently in Slovakia). He was the first child of Alajos Löwenstein and Elvira Freischberger. His father was a bookkeeper and a lieutenant in the Austrian Army Reserve. He had two other brothers. He was four years when his mother died, leaving his father to take care of him and his brothers. With this Alajos married his second wife Melanie Klein, who was his deceased wife’s best friend. They had two children.

Peter Lorre and Melanie, however never had a good relationship. During the Second Balkan War, 1913, Alajos moved his family to Vienna, as he foresaw the intensity of the war. From 1914 to 1915, he served on the Eastern Front, and as he developed a heart condition, he was later put in charge of a prison camp.

Peter Lorre started his acting career at the age of 17 on stage in Vienna. He worked with Richard Teschner, a Viennese Art Nouveau, and puppeteer. He later moved from Vienna to Germany initially settling in Breslau andthen Zurich. He moved to Berlin in the 1920s where he continued his acting career working with playwright Bertolt Brecht. He appeared in Mann ist Mann and the musical Happy End as Dr. Nakamura.

Peter Lorre came to the limelight after playing child killer Hans Beckert in the film M, 1931 directed by Fritz Lang. he followed his stunning performance with a role in the science fiction film F.P.1, 1932 alongside Hans Albers. In 1933, Lorre moved from Berlin to Paris during the rise of the Nazis and Adolf Hitler. He then proceeded to London where he had a role in the film The Man Who Knows Too Much in 1934.

Peter Lorre gained a visiting visa to the United States and therefore moved with his wife actress Celia Lovsky in 1934. While in Hollywood, he signed a contract with Columbia Pictures, and since the company found it difficult to get him roles, they lent to Metro-Goldwyn-Mayer for the film Mad Love, 1935. He followed it withCrime and Punishment, 1935, an adaptation of the 1866 Russian novel by Fyodor Dostoyevsky. He was then signed by 20th Century Fox for three years, and that started his role as Japanese detective and spy, John P. Marquand in a series of Mr. Moto movies. Ending his contract with Fox out of frustration, he starred in several B-picture films. Lorre naturalized to become a United States citizenin 1941.

A Career With Warner Bros

Peter Lorre started working with Warner Bros in 1941 initially on a picture-to-picture basis until signing a five years contract beginning in 1943. His first film for the company was The Maltese Falcon, 1941 and followed it with Casablanca in 1942. He starred alongside Humphrey Bogart and Claude Rains in The Mask of Dimitrios, 1944, and with Hedy Lamarr and Paul Henreid in The Conspirators, 1944. Other works include Hollywood Canteen, 1944, Three Strangers, 1946 and the Verdict in 1946 and the comedy film Arsenic and Old Lace, 1944 as Dr. Einstein. His last film for WarnerThe Beast with Five Fingers in 1946 after which his contract was terminated.

Peter Lorre experienced a decline in his career in Hollywood after the termination of his contract with Warner Bros. he then returned to stage performance and radio works. He filed for bankruptcy in 1949. He returned to Germany to co-write, direct, and star film noir Der Verlorene,(The Lost One), 1951. The film performed poorly at the box office. After his return to the United States in 1952, he became the first actor to play a James Bond villain with his role as Le Chiffre in the television adaptation of Ian Fleming’s novel Casino Royale in 1954 opposite Barry Nelson. That same year, he starred in 20,000 League under the Sea. His other works include Five Fingers, 1959, Voyage to the Bottom of the Sea, 1961 and the low budget films Tales of Terror, 1962, and The Raven in 1963.

Peter Lorre married three times first to actress Celia Lovsky in 1934 and divorced in 1945. He then married Kaaren Verne in 1945 and divorced five years later. Peter Lorre's last marriage was to Anne Marie Brenning in 1953 with whom he had a daughter, Catherine. He was addicted to prescription drug morphine, used in reducing pains from achronic gallbladder condition. He died from a stroke in 1964. He remains were cremated with the ashes interred at the Hollywood Forever Cemetery in Hollywood.

Peter Lorre was inducted into the Grand Order of Water Rats in 1942. In February 1960, he was awarded a star on the Hollywood Walk of Fame at 6619 Hollywood Boulevard.