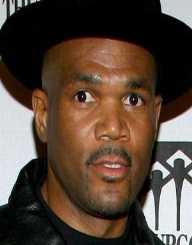 Darryl "DMC" McDaniels was born on May 31st, in 1964. He is a well-known American musician. He is one of the founding fathers of Run-D.M.C, a hip-hop group.

Darryl "DMC" McDaniels was born on May 31st, in 1964. His place of birth was in Harlem, New York. His parents raised him in New York City. McDaniels was born to an unmarried mother. Seeing that she could not raise him on her own, her mother gave out McDaniels to be raised by the New York Founding home.

His interest in hip-hop was fueled by a hip-hop group called the Grandmaster Flash and the Furious Five. A few years later, McDaniels developed an interest in a DJ career and as a result, taught himself using a mixer and a turntable. At the time, he was nicknamed Grandmaster Get High.

Shortly after, Darryl McDaniels sold his DJ machine after his close buddy Joseph Simmons purchased his mixer and turntables. During this period, Simmons strongly encouraged McDaniels to rap instead of mixing on the turntables. With time, McDaniels saw that rapping worked for him as compared to mixing. Following his new interest in rapping, he was nicknamed Easy D.

Later, Darryl McDaniels adopted another nickname D.M.C which was an acronym for ‘Devastating Mic Control.’ In 1984, McDaniels, Simmons and Jam-Master Jay released an album that put them in the limelight in the hip-hop world.

The trio continued releasing hit after hit and enjoyed success for a short period. Together, they enjoyed immense success after releasing the album dubbed Raising Hell. The album was ranked 6th on Billboard 200 charts. Similarly, the album topped the Top R&B/Hip-Hop Albums list. Owing to their success, McDaniels and his team earned themselves a name as the best hip-hop group.

With the overwhelming success that Darryl McDaniels had gained, he turned to drink. He was identified as a heavy alcohol drinker. He could drink up to 8 bottles of malt liquor in a day. Due to this behavior, he brushed shoulders with the law as he was arrested for DUI and public intoxication. He later suffered depression in 1997.

Darryl McDaniels turning point came after listing to “Angel” play on his car radio. It was a wake-up call to him as he began making efforts to find out about his family lineage. He then came to realize that he was adopted.

His bitter discovery helped him take on his path to recovery. He joined a rehab institution and later reconnected with his maternal mother. McDaniels drew his family inspiration and his career journey to come up with a documentary titled DMC: My Adoption Journey in 2006. This was followed by an album titled Checks Thugs and Rock n Roll.