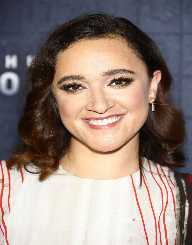 Keisha Castle-Hughes was born on March 24th, in 1990. She is a notable actress from New Zeeland. She earned high acclaim after playing the role of Paikea "Pai" Apirana in the hit film called Whale Rider. The film was a major success as it took home several awards such as Academy Award (best actress), and Broadcast Film Critics Association Awards (best actor or actress).

Keisha Castle-Hughes was born on March 24th, in 1990. Her birthplace was in Donnybrook, Western Australia. She is the daughter of Tim Castle and Desrae Hughes. At the age of four years, her parents migrated to Auckland in New Zeeland. Later, in 2001, Castle-Hughes earned her citizenship in New Zeeland.

Castle-Hughes went to Penrose High School before later enrolling with the Senior College of New Zeeland.

Keisha Castle-Hughes' career kicked off on a high note after featuring in Whale Rider in 2002. She played the lead role of Paikea in the hit film. Her role in the movie brought her profound fame. In 2004, she became an Academy Award nominee for the category of Best Actress. She was only 13 years old when she was nominated for the award. This also earned her recognition for being the youngest individual to be nominated under the category.

At the age of 16, Keisha Castle-Hughes dated Bradley Hull. The two had a daughter named Felicity-Amore Hull whom she was born in 2007. Unfortunately, their relationship ended in a breakup after they had spent seven years together. In 2013, Castle-Hughes tied the knot to Jonathan Morrison. This marriage did not last long as they divorced in 2016.