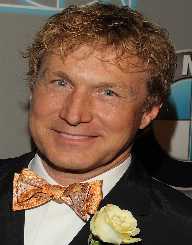 Bo Welch was born on November 30, 1951, in Yardley, Pennsylvania. He attended and graduated the University of Arizona College of Architecture.
He is married to actress Catherine O’Hara since 1992. The couple has two sons- Matthew and Luke.

Bo Welch is a production designer and art director for several Hollywood movies. His first work in this position was in the 1985 film The Color Purple, for which he earned the Academy Award Nomination for Best Production Design.

Welch is best known for his work together with director Tim Burton on movies such as Edward Scissorhands, Beetlejuice and Batman Returns. He also worked on A Little Princess and Men in Black. Welch has been nominated for the Academy Awards a total of four times. For the 1990 film Edward Scissorhands he won the BAFTA Award. In 2003, Welch made his directorial debut with The Cat in the Hat. For his work, he was nominated for the Golden Raspberry Award for Worst Director.