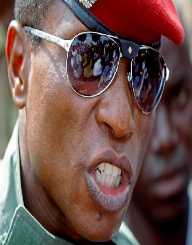 Moussa Dadis Camara was born in 1964 in the city of Koule, in Guinea. This town is located right next to the border with Liberia and Cote d’Ivoire. Moussa Dadis Camara belongs to the ethnic group of Kpelle, which are also called Guerze.

When Moussa Dadis Camara was a child, he got his primary and secondary education in Nzerekore, which is a city located not too far away from his hometown.

After graduating from school, Moussa Dadis Camara started studying in the Abdel Nasser University in Conakry, which is the capital city of Guinea. He studied economics and law there.

Moussa DadisCamara used to be Muslim but converted to Roman Catholic Christian later in life. Moussa Dadis Camara knows several languages, some of them being German, French, Kpelle, Maninka, and Susu.

In 1990 Moussa Dadis Camara enlisted in the Army of Guinea. There he initially started out as a corporal, but later became a Chief of Fuels in an army base in Kindia. During the time from 2001-2002 Moussa Dadis Camara was in Sierra Leone. He was there as a peacekeeping troop of the United Nations.

After this experience, President Conte decided to delegate Moussa Dadis Camara alongside a couple of other colleagues to go to a military training camp in Bremen, in Germany. This training started in 2004 and lasted for eighteen months.

Moussa Dadis Camara was the one who read this statement. Camara announced that the coup was at that point a necessity, as Guinea was in the crisis between increasing poverty and corruption. Camara stated that the President should be someone from the military branch, and the prime minister, a civilian to ensure an ethnically balanced government.

The support during the parade was explained as support for the coup. Camara intended to lead the government for two years and announced that the next presidential elections would be transparent and credible. This statement contradicted the constitution of Guinea, which stated the President should be elected within 60 days.

A day later the Prime Minister Ahmed TidianeSouare declared loyalty to Moussa Dadis Camara and therefore was able to continue his work. He worked as the prime minister only for half a year, before being imprisoned in 2009.

Nine months after announcing his presidency, Camara was asked to step down. The opposition party led the protest and was supported by civilians. The presidential guard “Red Berets” became extraordinarily violent and attacked, and killed more than 157 people during the event. More than 1200 people got injured.

The United Nations highly criticized this violence. The government of Guinea responded to this criticism by stating that not more than 56 people died, and most of them were injured by the people fleeing massively.

During the protest, Camara’s guards raped many women, which was also confirmed by the members of “Doctors Without Borders” organization, after treating several rape victims.

The International Criminal Court is still investigating this incident. The African Union demanded the resignation of Camara.

Following this incident, an arms embargo was enforced onto Guinea. The Economic Community of West African States imposed this.

Later in the year 2009 several unions – the European Union, the African Union and the United States, punished Moussa Dadis Camara and his 41 close followers. All of their bank accounts were frozen, they were banned from travel, and some other sanctions followed.

A couple of months later after the protest, Moussa Dadis Camara was shot during an attack by AbubakarToumba Diakite. During the attack, Camara’s driver and bodyguard were lethally injured and died.

The physical condition of Camara himself was described very differently. The official version was that he was injured lightly, but other sources stated that he was shot in the head. Hence the condition was serious.

The country was further on led by the vice-president, who was also the defense minister, Sekouba Konate. He returned from Lebanon. After the assassination attempt, the assassin Diakite is still not found and is currently still in hiding.