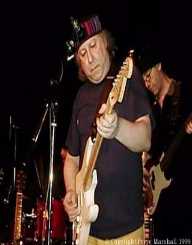 Peter Green is a British blues-rock guitarist and composer. Born in Bethnal Green, London, England on October 29, 1946, he became a vital personality in the second great epoch of the British blues movement. With his stylish and somewhat melodious, vibrato guitar play gained him popularity and praise from persons like B.B King, Eric Clapton, and Jimmy Page. Some of his greatest tunes are Albatross, Oh Well, Man of the World and Black Magic Woman. He is the founder of Fleetwood Mac.

In 1998, Peter Green was inducted into the Rock and Roll Hall of Fame. Peter Green is among 100 Greatest Guitarist of All Time and is ranked number 38 on that list. Other magazines like the Mojo magazine in 1996 ranked him as the third-best guitarist of all time.

Peter Green was born in Bethnal Green, London and the youngest among four children. Peter Green only became interested in guitar after one of his brothers had brought a Spanish guitar home. Peter Green then gained interest in it and decided to take it to a different level.

Peter Green started his career with the bands Bobby Dennis and Dominoes. Their main line of music was performing covers of pop chart and rock and roll standards. All this while, Peter Green was picking inspiring from Hank Marvin who, according to him is his guitar hero. Peter Green actually played Midnight by Shadows on his tribute album Twang in his honor in 1996. Exploring other opportunities, Peter Green joined the Rhythm and Blues’Muskrats and also The Tridents where he played bass. After spending some time with the band, he was engaged by Peter Barden to play in his band Peter B’s Looners as the lead guitarist. That time, he was able to release his debut single If You Wanna Be Happy, featuring Jodrell Blues as a B-side.

His release was an instrumental cover of Jimmy Souls original. As time went by Green built on his competence gaining popularity and was afforded the opportunity to fill in for Eric Clapton in John Mayall& the Bluesbreakers. He later joined the band fulltime when Clapton left the band for a solo career. In 1966 Peter Green made his debut recording with the band and the release of the album A Hard Road in 1967. The album contained two compositions of Green, The Same Way, and The Supernatural. Soon, he was given the name, The Green God for his talent and capabilities. He, however, left the group in 1967 to form his own.

Peter Green formed the band Fleetwood Mac with colleague Mick Fleetwood after both had left Bluebrakers. The group, which was initially called “Peter Green’s Fleetwood Mac featuring Jeremy Spencer” had Jeremy Spencer as a guitarist and Mick Fleetwood on drums and Bob Brunning as bass guitarist. The band’s first performance was at the Windsor National Jazz and Blue festival in August 1967. The band had a spectacular performance which caught the interest of Mike Vernon and therefore signed them on the Blue Horizon label. I believe My Time Ain’t Long was the first single released by the band and had Rambling Pony in the B-side. JohnMcVie of Bleus brakers later in 1967 joined the band replacing, Brunning.

Aside from performing blue covers, Peter Green also made original compositions and did this shifting from the band’s dominance of blues to other genres. The band released the studio album Mr. Wonderful in 1968. Greens composition Black Magic woman was a bang for the band, and it was followed with Albatross, 1969. Albatross did very well and top the British singles chart. Not relenting of their successes, they came out with other Peter Green compositions, including Man of the World, Oh Well in 1969. That same year, they recorded Blurs Jam in Chicago, which featured American blue heroes like Otis Spann, Willie Dixon, Big Walter Horton and J.T Brown. Fleetwood Mac in 1969 was signed to Warner Bros. Records, and that was followed with the release of their fourth studio album Then Play On which featured the band’s new guitarist Danny Kirwan. Spencer’s absence on that album was due to his decision not to play on any Green’soriginal composition.

Peter Green began to change, and that was noticed by other band members with his composition of Man of the World. His state of mind was declining with his high intake of LSD. The once clean shaved Peter Green began to grow a beard and was so much concern about wealth. According to Mick Fleetwood, Green was worried the band was not making money and wanted to give up. He later left Fleetwood Mac.

Peter Green joined Mayall, Rod Mayall and Larry Taylor to perform at the Bath Festival of Blues and Progressive Music in 1970 after he had left Fleetwood Mac. Peter Green also played on Peter Barden’s solo LP The Answer during that time. He also came out with a jam session, The End of the Game. During Fleetwood Mac tour in the US, Peter Green joined them briefly under the name Peter Blue. He featured the Bobby Tench’s Gass to record two tracks on the album Juju, a solo with Nigel Watson but his mental instability at the time wouldn’t allow him to release other tracks.

Peter Green went through series of test and was diagnosed with schizophrenia in the 1970s. Peter Green was therefore made to spend time in psychiatric hospitals to undergo electroconvulsive therapy. In 1977 after returning from a trip to Canada, Peter Green threatened his accountant with a shotgun which got him arrested.

Peter Green with the help of his brother was signed unto Peter Vernon-Kell’s PVK label. Peter Green came out with the single In the Skies, 1979. Peter Green also helped Fleetwood Mac on the album Tusk, 1979. He featured on the tracks Rattlesnake Shake and Super Brain on Mick Fleetwood solo album The Visitor in 1981. Peter Green during this time also worked with musicians like Katmandu, Vincent Crane, and Len Surtees.

January 1978, Peter Green was married to Jane Samuels but divorced just a year after. The couple had a daughter Rosebud Samuels-Greenbaum. He was born into a Jewish family.