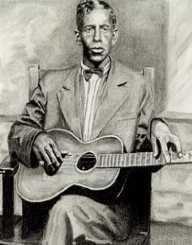 Charley Patton was one of the earliest and best-known singers of Delta Blues music. A singer-guitarist, Charley was born on May 1, 1891. His place of birth is Hinds County, Mississippi, United States of America. His parents Bill and Annie Patton relocated to Dockery’s plantation when he was around nine-years-old. While growing up there, Charley began playing guitar and developed a passion for music. He gradually veered towards playing blues with an uncanny liking for the same. As per rumors, his father Bill was not his biological father. Henderson Chatmon, an erstwhile slave, fathered Charley. Many of Henderson’s children became successful delta blue musicians afterward. They began performing in various capacities such as solo and group performers. To add credential to the rumor about Charley’s parentage, he was born with light skin and Caucasian features.

Dockery Plantation consisted of a sawmill and a cotton firm. The place was situated near Ruleville, Mississippi. While creating his style of singing, Henry Sloan’s unique style of playing music influenced Charley to a large extent. The world considers this new style as the early, pioneering form of blues music.

During his early teenage days, Charley used to perform at Dockery and other plantations located nearby. To his great joy, he found that he felt very relieved and free while singing. Soon, he formed an association with another promising musician named Willie Brown. He also mentored a bunch of local musical talents. Some of them were Chester Burnett, Tommy Johnson, Robert Johnson, and Fiddlin' Joe Martin.

Charley was primarily a blues musician and performed at rural parties and barrel-houses. He entertained the gathering at these places by singing ragtime-based, trendy, crowd-pleasing songs to support the dancers. While singing, he also resorted to mimicking and clowning. This helped him in becoming successful as a popular entertainer. He spent a majority of his musical career performing his favorite blues and other music catering to the needs of the public. Between 1929 and 1934, he made around 70 recordings. Using his heavily percussive guitar, he changed the trend of music with his strained, graveled, obscure voice. Choosing a wide variety of lyrics from topical to personal, he created some memorable and unique recording of songs. Among his most prominent and sought after recordings ‘Down the Dirt Road’, ‘Pony Blues’, ‘High Water Everywhere’, ‘Shake it and Break it’ and ‘Moon Going Down’ are rated as the best.

Though primarily a delta blues musician, Charley never shied away from trying other genres of music. He sang and played deep blues and nineteenth-century ballads. He even played different varieties of black and white country dance music as well as white hillbilly songs with equal ease, confidence, and comfort. Robert Franklin Palmer Jr. was a renowned musicologist who regularly contributed in the New York Times as a music journalist. He termed Charley as ‘Jack of All Trades’ after watching his versatility in the field of music.

Charley married his recording partner Bertha Lee. In 1934, they had a severe altercation. As a result of this nasty fight, both of them were prosecuted and were imprisoned in a Belzoni, Mississippi jailhouse. W. R. Calaway of Vocalion Records arranged for the bail of the warring couple. He brought Charley to New York City for his final recording sessions. After that Charley returned to his Holly Ridge, Mississippi based residence. However, the fight between the couple continued. Ultimately, Charley's wife successfully threw him out of their residence during his final days.

On April 28, 1934, Charley breathed his last. He was at the Heathman-Dedham plantation, near Indianola, at the time of his death. According to his death certificate, the cause of his death was attributed to mitral valve disorder.

During the peak of his career, he traveled far and wide inside America. After having performed in different towns along the Mississippi River, he went to Missouri, Tennessee, Illinois, and Georgia. He observed the racial discrimination prevalent in the Southern part of the USA. One of his timeless songs is “Down the Dirt Road Blues”. In the song, he narrated how passionately he wants to change the life of the African-Americans suffering the brunt of racism while living in the South in pitiable conditions.