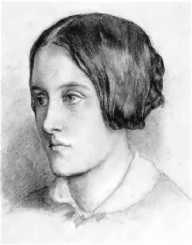 Victorian poet and novelist Amy Levy was born into an Anglo-Jewish family. She grew up in an affluent middle-class Victorian household where literary concerns were part of everyday life. The children wrote a family newsletter, The Popular Club Journal with articles, drawings, and poems. Her parents were Lewis and Isobel Levy, and she had six siblings.

Amy Levy was a pupil at Brighton High School, and she then enrolled at Newnham College at the University of Cambridge where she studied modern languages and literature (1879-1881).

At university, Amy Levy became friends with the South African writer Olive Schreiner (author of Story of an African Farm) and Eleanor, the daughter of Karl Marx.

After her university years, Amy Levy spent time traveling around Europe and began working as a freelance journalist. When she returned home, she became involved with the socialist movement and including women writers such as Beatrix Potter, Margaret Harkness, Eleanor Marx and Olive Schreiner who used to meet in the Reading Room at the British Library. Potter was very involved in the Fabian Society, and Levy attended meetings with her and other like-minded women.

Levy’s poem Xantippe appeared in the Dublin University Magazine in 1880. Then in 1881, a collection of her poetry, Xantippe, and Other Verses was published.Other publications include A Minor Poet and Other Verse (1881), Reuben Sachs: A Sketch (1888), Miss Meredith (1889).

In 1888 her first novel The Romance of a Shop was published. During the mid to late 1880s, Levy wrote a series of articles for The Jewish Chronicle and her work appeared in The Woman’s Word, published by Cassell and edited by the poet Oscar Wilde. She also posted a poetry collection A London Plane-Tree (1889).

Amy Levy had suffered from severe depression for many years when at age twenty-eight, she took her own life.

Amy Levy was born into a mostly secular Jewish family, and it was only at university that she started viewing herself as an Anglo-Jew. Later, she began writing about her position in English society as a Jewish woman.