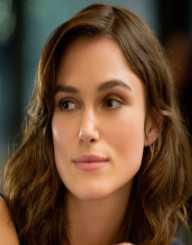 Keira Knightley was born on March 26, 1985. She is a British actress and model. She has starred in films such as ‘Pirates of the Caribbean Sea: The Curse of the Black Pearl’ among others.

Keira Knightley was born on March 26, 1985, in London. She was born to Will Knightly a Television actor and Sharman MacDonald who is a renowned playwright. She was brought up alongside an elder brother. She attended Stanley Junior School for her early education. She faced difficulty in school since she suffered from dyslexia. In 1993, she made her television debut in ‘Royal Celebration’. In 1995, she appeared in the films ‘The Treasure Seekers’ and ‘A Village Affair’.

In 1998, Keira Knightley appeared in the films ‘Coming Home’ and ‘Star Wars: Episode One The Phantom Menace.’ She continued studying and also acted in the film ‘Princess of Thieves’. In 2001, she completed schooling. In the same year she appeared in the film ‘Bend It Like Beckham’. She later attended Esher College where she took art, history and literature. She then dropped out of school to concentrate on her acting career.

In 2005, Keira Knightley received the Golden Globe Award for the film ‘Pride and Prejudice.’

In 2003, Keira Knightley dated Jamie Dorman until 2005. In 2005 she began a relationship with Rupert Friend. They dated until 2010. In 2013, she got married to musician James Righton. They currently live in East London. She has a net worth of fifty million dollars. She is presently thirty-two years old.