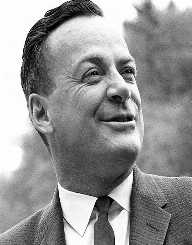 Richard Feynman was born on May 11, 1918, in New York City, New York, USA. His parents were Melville and Lucille Feynman. He had a sister, Joan, who also grew up to be a scientist. His mother also gave birth to one other son, but he did not survive infancy.

Parents were Melville and Lucille Feynman. He had a sister, Joan, who also grew up to be a scientist. His mother also gave birth to one other son, but he did not survive infancy.

Richard Feynman attended and graduated from Far Rockaway High School in the early 1930’s. After graduating from the school, he went on to study physics and other sciences at Princeton University. While at Princeton, he published a thesis, The Principle of Least Action in Quantum Mechanics, in 1942. After writing this, he graduated from Princeton.

Shortly after graduating from Princeton University, in 1942, Richard Feynman earned a job at the University of Madison as the Assistant Professor of Physics. In the same year, he became a member of the Manhattan Project. This infamous project was set in motion, and in secrecy, by the United States government (along with the support of other allied nations). Thousands of scientists from countries all over the world helped with this project. The goal was to make an atomic bomb before Germany (or any other axis power countries) could.

Richard Feynman’s duties in the project involved him doing complicated physics-based math problems and looking over several safety features of the bomb. He continued to work on the Manhattan project until the two atomic bombs, Little Boy and Fat Man, were completed in 1945.

After completing the Manhattan Project, Richard Feynman got another teaching job at Cornell University. He continued to work at the university until 1950. In the same year, Richard Feynman earned another teaching job at the California Institute of Technology. At both schools, he taught physics. In the 1960’s, Richard Feynman focused on his research in physics, but he also toured the United States, giving guest lectures at various universities. In the 1980’s, he began to work with NASA. He helped to investigate the cause of a rocket launch explosion. His research helped to prevent future explosions.

In 1948, Richard Feynman published the Feynman Diagrams. In these papers, he wrote about his discoveries in quantum physics.

Richard Feynman published a memoir on his life in 1985. The book was called, Surely You’re Joking, Mr. Feynman. The book held details of his personal life as well as his career.

Outside of his two major works, he also published numerous papers while in and out of college.

In the 1960’s, Richard Feynman was awarded three different awards for his work in the physics field. In 1962, he was awarded the Ernest Orlando Lawrence Award. He later was awarded the Nobel Prize in Physics in 1965. His expansion on his thesis (which he completed at Princeton University decades earlier) on quantum electrodynamics. In the same year, he was made a Foreign Member of the Royal Society.

In 1972, he was awarded the Oersted Medal for his work with teaching in physics.

He was given his last award in 1980, the National Medal of Science for Physical Science.

Richard Feynman died on February 15, 1988, in Los Angeles, California, USA. He was 69 years old when he passed away.