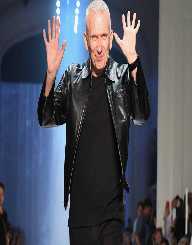 French haute couture designer was born on the 24 April 1952 in Bagneux, France. As a child, he developed an interest in clothing and fashion.

At the age of 18, Gaultier began a 12-month apprenticeship with Pierre Cardin.

Then in 1984, he opened his own boutique in Paris, Frances. He diversified by producing a range of accessories and perfumes and in 1997, his first haute couture collection. Eventually, he opened boutiques internationally including Asia and the Middle East. From 2003 until 2011, Gaultier was the head designer at Hermes. He worked with pop stars such as Madonna and Kylie Minogue as well as doing costume design in films such as The Cook, the Thief, His Wife and Her Lover (1989) and Bad Education (2004).

He is a recipient of the French Knight of the Legion of Honour award.