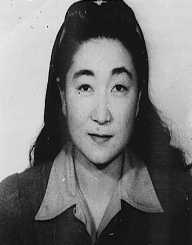 Tokyo Rose formerly known as Iva Toguri was an American-Japanese woman who worked as host of a Japanese propaganda radio program intended to intimidate the United States Army during World War II. She was named Tokyo Rose which was a famous name given to all English speaking female radio personalities involved in the Japanese propaganda in the South Pacific.

She took on the job as a host of the radio program when she was stranded in Japan which forced her to let go of her United States Citizenship. However, when she returned to the United States after the war, she was convicted for treason and sentenced to six years in prison. She was released in 1976 after being pardoned by United States President Gerald Ford. She died years later in 2006.

Tokyo Rose was born Iva Toguri on July 4, 1916, in Los Angeles, California. She was of Japanese ancestry, and her father was a businessman in the United States. She grew up as a healthy child with dreams to live up the American life as other American teens. She aspired to become a doctor and studied at UCLA completing in 1941.

However, she did not practice as a doctor as she was sent to Japan after her education to tend to a sick aunt. With the outbreak of the war with the United States and attack on Pearl Harbor, it became impossible for her to leave Japan. She was forced to renounce her American citizenship to fit in her aunt’s family, but the conditions were unbearable since they could not bear with her pro-American sentiments.

Tokyo Rose began working for Radio Tokyo (NHK) as a part-time typist and later on appointed as a host for the propagandist program known as ‘The Zero Hour’ in November 1943 adopting the name Orphan Ann. The program comprised of news reports, American music, and skits.  Her unique feminine voice was a plus to the program as it was intended to get to the United States troops.

The initial plan for the show was to intimidate and demoralize the soldiers by hurling insults and teasing them. She was also to convey propaganda about their families and partners back at home including telling the soldiers that their spouses were becoming unfaithful back at home. She worked for the radio program for three years before the American troops had a hit on Japan leading to their surrender.

After World War II in 1945, the United States military troops conducted their investigation of Tokyo Rose and the radio broadcast. She was arrested for having collaborated with the enemy and committing treason by broadcasting propaganda on the Japanese based radio program. She was sent to prison for a year but was later released on October 25, 1946, for lack of enough evidence that incriminated her as ‘Tokyo Rose’.

She returned to the United States and upon entry into the country, Walter Winchell an influential radio broadcaster called for a fresh trial on her case. She was again arrested in the U.S on August 28, 1948, and brought for trial on July 5, 1949, after being confined for one year in prison.

In 1949, she was convicted and sentenced to ten years in prison. In 1974, investigations proved that witnesses on the case were lured into giving false testimony and in 1976, President Gerald Ford granted her parole.