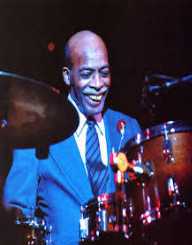 Jo Jones moved to Alabama and learned to play the saxophone, piano, and drums.

In his early days, Jones worked as both a drummer and tap-dancer for carnival shows, and in the late 1920s, he joined the Blue Devils, a band run by Walter Page, in Oklahoma City. In 1934, he joined Count Basie’s band. He was with Basie until 1948, only taking two years off for military service during that period.

Jo Jones was known as one of the first drummers to use brushes on drums. In 1944, he made his film debut in Jammin’ the Blues. In his later years, he regularly appeared at the West End Jazz Club at 116th and Broadway, and he became known as Papa Jo Jones.

He did his autobiography verbally to Albert Murray from 1977 to 1985. It was called, Rifftide: The Life and Opinions of Papa Jo Jones, but was not published until 2011, after the death of Jones.

Jones was 73 when he died of pneumonia.

1979:   Inducted into the Alabama Jazz Hall of Fame

1985:   Awarded an American Jazz Masters fellowship by the National Endowment for the