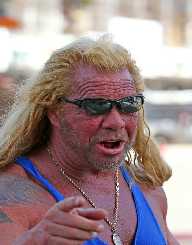 Duane Chapman is a bounty hunter whose performances are captured in TV shows such as the eight season series, ‘Dog the Bounty Hunter’ and a reality TV program, ‘ Dog and Beth: On the Hunt.' Notably, he has written two books, ‘You Can Run But You Can’t Hide’ released in 2007 and ‘Where Mercy Is Shown, Mercy Is Given’ published in 2010.

Duane Chapman was born on February 2, 1953, in Denver, Colorado to parents Wesley and Barbara Chapman. His mother has a German descent and a pastor of the Assembly of God church while his father is of English ancestry. Chapman is the oldest of four siblings, with two sisters and a brother. Chapman faced five-year imprisonment in 1976 due to first-degree murder. While in a Texas prison his wife divorced him and married his best friend.

During his imprisonment, he served as a warden’s barber and did fieldwork. While serving his sentence, he received congratulatory remarks from a Correction Officer after he tackled an inmate who was about to be shot for an attempted escape. This comments inspired him to be a bounty hunter after his release on parole in January 1979.

As a bounty hunter, Duane Chapman made international news on June 18, 2003, after he captured Andrew Luster alongside his hunt team of his son Leland and Tim Chapman. Luster had been a convict who fled the United States in the middle of his trial on multiple rape charges, drugging, and assaults. Chapman’s hunt team captured him in Puerto Vallarta, Mexico where he lived with a fake identity.

An unfortunate event occurred when Mexican police arrested the teams together with the convict on their way to California, and all of them jailed. However, Luster’s identity was confirmed and sent to a 125-year sentence in California but Chapman and his team left in the Mexican prison. His wife, Beth alerted the media in the United States which aroused public opinion, and bail and a statute of limitations. Chapman and his team were taken to federal prison after the Mexican government declared them fugitives because bounty hunting is illegal in Mexico.

On September 15, 2006, they were granted a bail release with an order to wear an electronic monitoring device on their ankles. Chapman’s attorney tried to free him, but his efforts failed as the Mexican authorities charged him with a felony and set a deportation hearing on November 16, 2006. A report from a lower court was not received pushing the trial to December 23, 2006. However, due to a letter that was sent to U.S Secretary of State, Condoleeza Rice, by 29 Republican diplomats, the Mexican federal court halted the criminal case until January 16, 2007.

During the judicial proceedings of February 16, 2007, the Mexican federal court found out that there was no reason to charge Duane Chapman on deprivation of liberty. On March 7, the International Affairs committee passed a resolution after Hawaii State Representatives requested the Mexican president to drop the deportation charges.

During this time, Duane Chapman alongside his attorney appeared in several media shows including a 94.1 KMXB, Mark and Mercedez Morning show, WFLD Morning show with Mike and Juliet THE 9 on Yahoo! among others. On August 1, 2007, Chapman’s arrest was invalidated followed by September 29, 2006, when his electronic monitoring device was removed temporarily for media appearances to the East Coast.

Remarkably, Duane Chapman released his autobiography ‘You Can Run But You Can’t Hide’ in 2007 that was rated at #1 on the New York Times bestseller list. This release followed his second book, ‘Where Mercy Is Shown, Mercy is Given’ published in 2010.

Duane Chapman’s bounty hunting opened a new show production titled, ‘Take This Job’ a program that featured people with unusual occupations. On August 28, 2003, the truTV interviewed him for an episode of the series, ‘Dominick Dunne’s Power, Privilege, and Justice. He also made an appearance in ‘Coming Distractions’ episode of the ‘Corner Gas’ film which he is portrayed arresting Brent.

Alongside his wife Beth, he made an appearance on a one-hour special of ‘Criss Angel Mindfreak’ including Chapman’s alone appearances in George Lopez’s episode and season two finale of NBC show, ‘The Trial’ where he captures Joy Darville in the episode ‘My Name Is Earl.' Chapman also makes a cameo appearance in Season 7 and 8 of ‘Hawaii Five-0’ and in a television film, ‘Sharknado: The 4th Awakens’ which he plays as a chainsaw dealer.

The A&E also created a reality series that featured Chapman’s bounty hunting job and on August 30, 2004, a series titled, ‘Dog the Bounty Hunter’ released with a theme song performed by Ozzy Osbourne. However, a cancellation order was issued in 2012 after eight seasons.

Duane Chapman and his wife Beth together with his son Leland Chapman and Duane Lee Chapman II alongside his daughter Lyssa Chapman worked as bail bondsmen, and body hunters featured on the A&E show ‘ Dog the Bounty Hunter’ which ran for eight seasons.

On April 2013, a new CMT reality series began airing titled, ‘Dog and Beth: On the Hunt’ which featured Chapman, his wife Beth and son Leland seeking business advice and assistance from bail bond agencies across the country in efforts to capture most wanted fugitives.

Duane Chapman had a teenage relationship with Debbie White and had a son, Christopher Michael that he learned about his existence after he reached his adulthood.

On April 1, 1972, Duane Chapman married La Fonda Sue Honeycutt in Pampa Texas, and they had two children, Duane Lee and Leland Chapman. However, Sue divorced him while he was in prison and married his best friend. She allowed the boys to continue seeing their father, but Chapman obtained their custody after they reached their teenagehood.

On August 22, 1979, he married Anne M.Tegnel in Colorado and had three children, Zebediah. D. Chapman, W. Chapman, and J.R Chapman. Unfortunately, Zebediah died in 1980 after his birth. The couple divorced on August 5, 1982, and the mother raised the two children.

Chapman met his current, Alice Elizabeth in 1986 when she was 19.They had an on and off relationship even marrying others until they reconciled in 1995. Beth works in a bail bonds office giving counsels detainees and helps his husband in bounty hunting. They married on May 20, 2006, after 16 years of marriage and they have two children together, Bonnie Joanne Chapman and Garry Chapman.