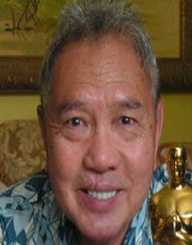 Haing S. Ngor was a physician who later turned into an actor. His role in The Killing Fields won him the Academy Award in the year 1985. He was later murdered under unclear circumstances in 1996 shortly after featuring in Hit Me.

Haing S. Ngor was born in Bathi District in Cambodia on 22 March 1940. Under the rule of Khmer Rouge and Pol Pot, he underwent a lot of atrocities before he moved to the U.S.

Although he was a trained physician and a gynecologist, Ngor was forced to hide his credentials since all the learned persons were targeted under the rule of Khmer Rouge. His wife had a complication during the birth of their first child. Although Ngor was a gynecologist, he was unable to help his wife since he would have been killed.

He, however, survived the killing spree and later escaped to Thailand after the collapse of the dictatorship regime. In Thailand, he worked as a refugee camp doctor before he found his way to the United States of America.

In the U.S., Haing S. Ngor decided to take a different career path, dropping his profession as a doctor and becoming an actor.

He came up with his first movie Cambodian Odyssey, in 1988; a movie where he tries to explain how he managed to escape Khmer Rouge.

The second edition of the movie Survival in the Killing Fields which was co-written with Roger Warner was released.

Despite no previous experience in acting, he managed to win the Oscar Award becoming the first Asian to win the award.

The Oscar Award opened doors for him. He later appeared in a series of movies such as Heaven & Earth and later Vanishing Son.

In honor of Haing S. Ngor, a foundation to aid Cambodian victims was put up in 1997 to raise funds.

Haing S. Ngor was shot dead and killed instantly outside his home on 25th February 1996. After his death estate became a center of various battles.

A woman claiming to have been married to him and many other Cambodians claimed his estate. Most his fortunes, however, went his brother.

Theories of his death

Three have been tried and convicted in connection to Haing S. Ngor death. The investigation has pointed out the motive to be connected to theft. The report has, however, has been challenged by many.

There have been reports linking his death to politics. It is believed he might have been killed by Khmer Rouge sympathizers. The claim however never held water since it was never proved.

A different theory claimed that Ngor was killed on Pol Pot's orders. There was, however, no credible evidence to support the claim.