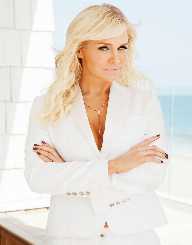 Yolanda Hadid was born Yolanda Van Dan Herick on the 11th of January 1964. She grew up in Papendrcht, Netherlands. Her father died when she was seven years old, and her mother raised her along with her younger brother, Leo. She had previously been a little kid growing up on a farm riding horses and milking cows. After her father’s death, she soon had to put on grown-up shoes and take odd jobs to assist her mother in fending for the family. By the age of thirteen, she was working as a dishwasher in a local Chinese restaurant.

Yolanda Hadid's life took a turn around by sheer chance. She was asked to replace a model at a show by Dutch designer Frans Molenaar. She was noticed there by the owner of Ford models, Eileen Ford who took her up under her professional wings. Shortly after, she left Holland and became an international model. She left her farm life into the spotlight. She got a chance to be photographed by famous photographers and to travel to exotic places. Her new occupation took her to Paris, Milan, Sydney, Tokyo, New York, and Hamburg. She modeled in several sophisticated fashion shows and photo shoots.

In 1994, the supermodel met and married Mohamed Hadid, a real estate developer. Thus Yolanda Van Dan Herick became the name she is well known for, Yolanda Hadid. The couple had three children together, Gigi, Bella, and Anwar. The marriage however crumbled and they divorced in 2003.

The newly divorced mother of three moved her children to Montecito where she started a new venture in interior business and remained single for many years.

Yolanda Hadid’s life as a single mother of three ended in 2010. She met and married the sixteen time Grammy award-winning music executive, record producer, musician and songwriter, David Foster. He had been married three times previously and came along with five daughters into the new marriage.

They got married on 11-11-11 and had a marriage theme to fit the unique date.

CAREER IN THE REAL HOUSEWIVES OF HOLLYWOOD

Following her marriage to David Foster, Yolanda rose to celebrity limelight when she joined the show Real Housewives of Hollywood in 2012. This came about as she was married to a Hollywood celebrity.

Not too long after the celebrity Housewife started to settle into life in the limelight of a hit reality show, Yolanda Hadid was diagnosed with Lyme disease. The disease took a toll on her health and her personal life. She documented all her struggles in the episodes of the reality show.

By 2015 she reported that the Lyme disease had so damaged her that she had lost the ability to read or even watch TV.

To further document her struggle with Lyme disease, Yolanda has written a book ‘Believe Me: My Battle with the Invisible Disability of Lyme Disease’ with a planned release date in February 2017.

The former supermodel’s struggle with Lyme disease started about the time Yolanda got married. This put a strain on their relationship. Her life had become restricted to her bedroom while her husband was barely home due to his hectic work schedule. Soon the problem ate away at the marriage until they announced on the 1st of December 2015 that they were getting a divorce.

In the celebrity’s struggle with a crippling disease, Yolanda Hadid has not been met with only sympathy.

She has been heavily criticized as drawing too much attention to herself with the disease. Chief of those promoting this is two of her stepdaughters Sara and Erin Foster. According to them, a person who is dying could not possibly continue on a reality show. Their comment about her detailed discussion about her health struggle is that a person who has a disease would try hard to be seen as normal and not draw unnecessary attention to herself.

In her defense, some of Yolanda’s fans and fans of the show have argued that, since she was correctly diagnosed with Lyme disease, it is not something that can be faked. It is common knowledge that it is untreatable and its effects are well known thus there is no way she could be overacting.

Some fans of the Real House Wives of Hollywood reality TV show have also complained that they are tired of having to hear about Lyme disease over and over.

WHAT IS NEXT FOR YOLANDA HADID

Yolanda Hadid had a terrible 2016. She finalized her divorce from husband, David Foster. She also had to quit the Real House Wives of Hollywood. She announced that she would not be joining season six on 15th of June 2016.

She changed her name back from Yolanda Foster to Yolanda Hadid to match the names of her children.

Despite the struggle and challenges of the year, Yolanda appeared to be taking a positive outlook on life. She posted a beautiful sunset picture from her new apartment on the 21st of December 2016. On the picture posted on Instagram she spoke of new beginnings and to sum up her past struggles she said: "Sometimes what you are most afraid of doing is the very thing that will set you free........ #WindowsToMyWorld #Home #NewBeginnings."

At the end of 2016, Yolanda Hadid’s net worth was estimated at 45 million dollars.