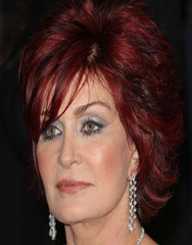 Sharon Rachel Osbourne aka Shaz is an incredible writer, businesswoman and reality television star. She rose to stardom for marrying Ozzy Osbourne, a notable metal singer. It wasn’t long that her family was aired in an MTV reality show which was known as ‘The Osbourne’s.’

This is what gave birth to other incredible roles such as being aired on the X Factor shows as well as America’s Got Talent. Sharon childhood life was not that appealing, and that’s why she promised herself not to lag or welcome any negativity in her life. She has sold over two million of her biography called Extreme.

Sharon Rachel Osbourne was born on 9 October 1952 in London, England. She was born to Don Arden musician and Hope Shaw. Her childhood background still brings tears in her eyes to date. Her once loving father turned into a violent man.

He managed different musical brands including Small Faces and Little Richard. With all the affluence that he had, he wasted it all due to poor management. Sharon lingered in poverty, and that’s where she befriended alcohol to the extreme.

Sharon Osbourne's career began in 1979 when she took over Ozzy Osbourne’s career. It happened after her husband was ejected from the metal band called Black Sabbath. She took over the whole organization as well as promotion. Ozzy’s album tour called Blizzard of Ozzy was managed by none other than Sharon herself.

After some time, Sharon launched her management company known as Sharon Osbourne Management. With the collar name tucked, she managed different artists including Lita Ford, Motorhead, and The Smashing Pumpkins and so on.

In 2000 and 2007, Sharon Osbourne was seen in a myriad of television shows including her own called The Osbourne’s. She was also seen taking a role of a judge on America’s Got Talent and The X Factor. Also, Shaz is also an incredible author. She published books such as The Talk, Unbreakable, Charm School and the Extreme.

Sharon Osbourne first started as a wife to Ozzy, but her dreams meant otherwise. She turned into a manager, businesswoman as well as managing other people’s career including Gary Moore. In 2006 her autobiography called Extreme was nominated as the best Biography of the year during the British Book Awards. Ozzy and Sharon were also honored for their in-depth contribution in the field of music with a Silver Clef Award in London.

In 1982 Sharon Osbourne married Ozzy Osbourne, and the duo has been struggling with alcoholism and violence. They are still together whatever come may. The pair has three children, Kelly, Aimee, and Jack. She is a cancer survivor, and this gave her an opportunity to found Sharon Osbourne Colon Cancer Program in 2004.