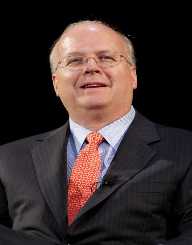 Karl Rove is an American politician born on December 25th, 1950. He is an active member of the Republican Party. During former president George W. Bush’s rule, he worked as the chief of staff and senior advisor. During that time, Bush commonly referred to as 'the architect.' He also played a major role in George W. Bush’s campaign that led to his election as president of the US.

Karl Rove is best remembered for the series of successful campaigns that he managed. He ran a successful campaign for Bill Clements who became governor in 1986. Later he led the campaign for John Ashcroft and who won the senate position in 1994. He became a political analyst, featuring many times in Fox News after his services at the white house. He also contributed to The Wall Street Journal and the Newsweek. Michael Barone, a prominent and respected columnist, describes Rove as the most influential politician ever in the history of the US.

Karl Rove was born on December 25th, 1950. His place of birth was Denver Colorado in the United States of America. He was brought up by his mother Reba Louise and stepfather Louis Rove in Sparks, Nevada. Louis was a geologist while his mother was a manager at a gift shop.  His biological father left the family when he was just a young boy. He came to adore Louis Rove for assuming his father’s role in his life and his four other siblings. His stepfather later divorced his mother, and that was when he found out from his uncle that he was not his biological dad. His mother committed suicide on September 11th, 1981

Karl Rove took his high school studies in Salt Lake City where his family moved to in 1965. He joined the debating club while at school and proved to be a great debater. His teacher later encouraged him to try the class senate elections which he won. He also studied in Olympus High School. In both his junior and senior years he was elected president f the student council of the school.

In 1969, Karl Rove joined the University of Utah under scholarship. He majored in political science. In 1971, he dropped his studies to earn a living at the College Republican National Committee as the Executive Director. Joe Abate was the chairman of the committee at the time and became a great mentor to Rove. He would later join the University of Maryland in College Park towards the end of 1969. He dropped out again before he completed his studies.

Karl Rove began his political career in America way back in 1968. In 1977 he worked in Texas for Dallas’s state representative Fred Agnich as a legislative aide.

In 1978 Karl Rove assisted William Clements in the gubernatorial election in Texas which he won. In the same year, he also helped George W. Bush in Texas congressional campaign though he lost in the polls.

Karl Rove led other successful campaigns for other republican members since then. In 1980 he once again assisted Bush in his unsuccessful presidential campaign. From 1981 he became president of Rove & Company till 1999.

Karl Rove led Phil Gramm to his victory in the U.S. Senate campaigns in 1984. Later in 1986, Clements was re-elected governor with help from Rove.

In 2001, Karl Rove became the senior advisor to George Bush who was the US president at that time. In 2004 he was appointed deputy chief of staff in the white house.

After his service in the White House, Karl Rove became a political analyst, featuring many times in Fox News. He also contributed to The Wall Street Journal and the Newsweek.

In 1976, Karl Rove tied the knot with Valerie Wainwright. They later divorced in early 1980.

Karl Rove remarried at the beginning of 1986 to Darby Hickson. They were blessed with one son, Andrew Rove. The relationship led to divorce once again in December 2009.

Karl Rove wedded Karen Johnson in June 2012. Among the guests at the wedding was George W. Bush.