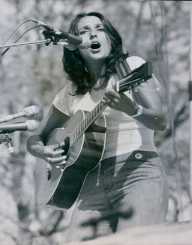 Singer-composer-lyricist and social activist Joan Chandos Baez, well known for rendering contemporary folk music which often includes the theme of protest and social justice, was born on January 9, 1941, in Staten Island, New York, United States of America. She belonged to a Mexican-Scottish ancestry, her father, Albert Baez being born in Puebla, Mexico and her mother, Joan Baez being born in Edinburgh, Scotland. Joan Chandos’ father immigrated to the USA along with his family when he was only two years old. She was brought up in Brooklyn, New York.

She was the second child among the three daughters of Albert and Joan Baez family. Her mother was often referred to as Joan Senior or Big Joan. From her early childhood days, Joan had to suffer racial discrimination which often included abusive slurs hurled against her mainly due to her Mexican origin and the inheritance of her father’s dark complexion. However, the onslaught of such racism did not deter her from pursuing her in-born musical talent. She also got herself involved with many social causes, fighting for a variety of social, political and economic issues during her early teen itself.

Joan earned her high school graduation from Palo Alto High School in 1958. She frequented many American and foreign cities of France, Canada, England, Spain, Switzerland and also the Middle East due to her father’s research, teaching position, work in health care sector and his association with UNESCO during her growing years. She had to spend a year in war-ravaged Iraq when she was only ten years old. She witnessed the horribly poor condition of the common people of that country and the utter violation of human rights prevailing at that time in Iraq. Her involvement in social activism later in her career was influenced by all these racial discriminations she suffered during her early life and the suffering of people she witnessed while staying in different countries, particularly Iraq.

In 1958, her family moved to Massachusetts, when her father accepted a faculty position at MIT. There she got herself enrolled at the Theatre School of the Boston University. She did not find her experience at the University congenial and abandoned her course only after studying for six weeks there. However, Boston and Cambridge at that time were fast becoming the center of the folk music culture and Joan began to sing in different venues in and around the city of Boston and nearby Cambridge.

Joan gave her first concert in 1958 when she performed at the Club 47 in Cambridge. For the first concert, she was paid $10 and was asked to regularly perform there for $25 per show. In 1959, she delivered two duets along with well-known folk singer Bob Gibson at the Newport Folk Festival in Rhode Island after being invited by the latter to perform there. Her performance, particularly her heavenly voice quality, immediately attracted the attention of people associated with music. She was contracted by the Vanguard Records and she recorded her first album titled ‘Joan Baez’ in 1960 immediately after her second appearance at the Newport Folk Festival.

Joan Baez did not have to look back since the release of her first album. She achieved newer milestones and became a hot property soon after the release of her first album. In the next few years, she toured extensively throughout America and other foreign countries singing to capacity crowds at different college campuses, concert halls etc. Her second album ‘Joan Baez, Vol. 2’ was released in 1961. The album went ‘Gold’ soon afterward. Her next two live albums ‘Joan Baez in Concert, Part 1’ (1962) and ‘Joan Baez in Concert, Part 2’ (1963) also went Gold. She altogether produced eight Gold albums and one Gold single, an ample proof of her popularity as a singer of the highest quality.

Her fourth album ‘Joan Baez in Concert, Part 2’ published in 1963 featured hitherto unknown personality Bob Dylan, who later became the face of popular music and culture in America for five decades and even received a Nobel Prize for literature in 2016. Joan was instrumental in giving Bob Dylan an early career boost by introducing him in her album.

Joan’s few memorable songs include “There But for Fortune”, “Diamonds and Rust”, "We Shall Overcome", "The Night They Drove Old Dixie Down" and "It's All Over Now Baby Blue".

CAREER AS A POLITICAL ACTIVIST

Apart from her singing and musical talent as a singer-songwriter and an acclaimed guitarist, Joan Baez is a very popular Civil Rights, Anti-War, Women’s Rights, Environmental and Children’s Activist. She is the symbol of protest movement all over the world. She first sang the immortal song, the civil rights anthem ‘We Shall Overcome’ while participating in a rally organized in Washington for Jobs and Freedom in 1963. The song was penned by Pete Seeger and Guy Carawan.

She continued to sing the song on different other occasions as a mark of solidarity with the protesters. She was at the forefront of the Anti-Vietnam war protests and rallies during 1964. She even spearheaded a movement for withholding tax payment to the establishment as those payments were used to meet the war expenses of the government. She was jailed twice in 1967 for her such refusal to pay taxes.

Joan Baez had a romantic relationship with Bob Dylan for several years. They jointly performed regularly during the 1960s. Their relationship ended by the end of the 1965 tour. She married David Harris, journalist, anti-war activist and a prominent leader in the national movement opposing the Vietnam War Draft, on March 26, 1968. They had a mutual divorce in 1973. Their only son Gabriel, a drummer by profession, was born on December 2, 1969. During the early 1980s, Joan dated Apple co-founder Late Steve Jobs, 20 years younger than her. Steve Jobs had even planned to propose her for marriage.

She is a recipient of Grammy Lifetime Achievement Award bestowed to her in 2007. The award was conferred to her for her outstanding contribution of artistic significance in the field of recording during her lifetime.