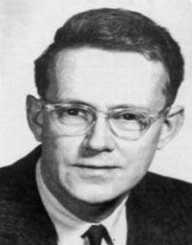 Edward Mills Purcell was born on August 30, 1912, in Taylorville, Illinois, USA. His parents were Mary Mills and Edward Purcell.

After graduating from Harvard, Edward M. Purcell began work there as a physics instructor. He worked here for only two years before instead working at the Massachusetts Institute of Technology (MIT) in the radiation laboratory. He eventually became the head of the Fundamental Developments Group within the Laboratory. He worked here until 1945. After this year, he returned to Harvard as a researcher.

Back at Harvard, in 1946, he quickly discovered something new with his colleagues Henry Torrey and Robert Pound: Nuclear Magnetic Resonance (NMR). Wikipedia defines NMR as “a physical phenomenon in which nuclei in a magnetic field absorb and re-emit electromagnetic radiation.” This discovery would later win him a Nobel Prize. NMR would also be used for many other things (medicine, chemistry, computers, etc.) both during and after his lifetime.

In 1949, Edward M. Purcell became a professor at Harvard, teaching physics. After earning this job, he continued with his research. His research mainly focused on nuclear magnetism and astronomy. One of his major discoveries in astronomy was seeing the spiral arms in the Milky Way, something that had never been done before.

Many of his discoveries and research work went on to be used later during and after his lifetime. An example of this is with his research on negative spin temperature, which is now used in lasers. His work in magnetics is one of the most useful things he has discovered and researched.

Later on in his career, he worked with another scientist, Norman Ramsey. Together they studied CP symmetry, which assumes that particle forces are symmetric. However, these two investigated whether this was true in all cases, which lead to helping other scientists understand particle forces better.

Edward M. Purcell published a textbook with another scientist, David Morin. The book is called Electricity and Magnetism. Although his book was published decades ago, new editions are still being made and used in colleges all around the world.

All of Purcell’s awards are due to his accomplishments in science. Some of his most prestigious awards are listed below.

Edward M. Purcell served as a science advisor to several presidents, including Dwight D. Eisenhower, Lyndon B. Johnson, and John F. Kennedy. He was a member and fellow of the following groups: National Academy of Sciences, American Academy of Arts and Science, and the President’s Science Advisory Committee.

Edward Mills Purcell married Beth Busser in 1937. They had two children together: Dennis and Frank. The marriage ended with Purcell’s death.