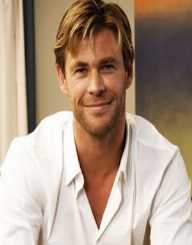 Born on August 11, 1983, Chris Hemsworth is an Australian actor best known for his role in the Marvel series as Thor. His performance in the TV series Home and Away, 2004 also received good reviews propelling him to fame. The award-winning actor has also made his presence felt in the science fiction film Star Trek, 2009, A Perfect Getaway and the horror comedy The Cabin in the Woods 2012.

Chris Hemsworth made her acting debut in 2002 playing King Arthur in the television series Guinevere Jones. He later played in the opera series Neighbours and also an episodeMarshall Law. In 2004 he played of Kim Hyde in Australian soap opera Home and Away even though he had previously auditioned for the role of Robbie Hunter. He played that role till 2007 when he left. In 2006, he contested in the fifth season of Dancing with the Stars Australia but was eliminated after the sixth week.

He went on with his acting career starring in Star Trek in 2009 and his debut movie in the United States Ca$h in 2010. He had good reviews in that film urging him on to take several other rules. In 2011 he played a role Thor in the Marvel Comics Thor which shot him to fame. The talented actor has featured in several other films since them and will reprise his role Thor in Thor: Ragnarok which is to be released in 2017. He is also set for two films Avengers: Infinity War, which will be released in 2018 and 2019. Another film to be released is the reprise of his role as George Kirk in the Star Trek series.

Chris Hemsworth is married to Spanish actress Elsa Pataky since December 2010. The two met earlier that year at a ceremony. The couple has been blessed with three children, a daughter, and male twin. The family currently lives in Byron Bay after moving from Los Angeles in 2015. He supports Western Bulldogs in the Australian rules football. In 2014, he was the star of Australian Football League’s Everything’s Possible Campaign.

Chris Hemsworth has won some awards throughout his acting career.  In 2017 he won the Kid’s Choice Award’s Favourite Butt-Kicker for his role in The Huntsman: Winter’s War, People’s Choice Award for Favourite Action Movie Actor, Avengers: Age of Ultron & In the Heart of the Sea, 2015 and MTV Movie Award for Best Fight.