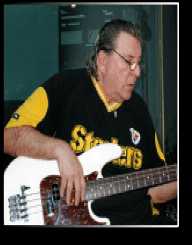 Bob Babbitt came to prominence for his melodic tone that propelled a dozen of traditional soul songs. Some of the most important lyrics of all times include The Tears of a Clown, Signed, Sealed, Delivered and “Mercy Mercy Me.” He was a member of Motown Records and the Frank Brothers studio band. Throughout his career, he retired with 30 Gold and platinum records. He learned how to set and play bass at 15 years of age.

On 26th, November 1937 Robert Kreiner was first seen in the world in Pittsburgh. But he mostly spent his childhood life in Mt. Washington where he joined South Hills High School. His protective father went to serve as a bricklayer in Hungary. At his tender age, he got interested in music, all thanks to his parent's earnest love for souls. His parents participated in gypsy rock bands; all ages enjoyed the group. Their records were consistently heard on record players and radios.

For his tremendous work in the bass, Bob joined a private bass lesson at Pennsylvania College. He later joined the Pittsburgh Symphony Orchestra where he played bass guitar for three years. It was there that he teamed up with Pittsburgh Symphony Jr. that led him to join principled schools. He was profoundly influenced by several bassists including Charles Mingus and Ray Brown.

Bob Babbitt's family moved to Hungaria where he joined the Hungarian gypsy band. This is what marked the beginning of his career as a bassist. While still in his teenage years, Bob showcased his love for music with blues and rhythms. Bill Doggett’s and Red Prysock mostly influenced his style of music and tones. He also loved to listen to R&B songs, especially on Pittsburgh radio by Mary Dee and Porky Chedwick.

At only 15, Bob started to sing in local nightclubs where he teamed up with a band. After some time he opted to change his style of music from upright bass to a more natural and louder electric bass. At 17, he purchased a Jazz, Bass.

One day Bob Babbitt went to Detroit Club where he introduced himself to a well-known group titled Royaltones. After showcasing his talent and love for bass, the band hired him without a doubt. It was there that the band recorded and released 25 songs and Bob played a significant role. A Saxophonist called George Katsakis led the Royaltones band. Some of their released songs cemented the world of fame including the Flamingo Express and Little Town Flirt. In 1964 Bob left the band when he went to serve as studio bassists.

In the mid of 1966, Bob Babbitt landed a well-paying job at Golden World Studio, where he worked as a part-time bassist. In the process, he also recorded one of his first single called Cool Jerk followed by an R&B tune called I Just Wanna Testify. After a short pause, Babbitt released several songs including Loves Makes the World Go Round, Signed, Sealed and Delivered as well as We Can Work It Out.

Early in 1986, Bob Babbitt moved to New York where he went to perform at a grand concert in Nashville. NY became his best home for two decades. He took the time to record songs with other promising artists such as Carlene Carter, Shania Twain, Tracy Nelson and Elton John.

In 2002 Bob partnered with Funk Brothers band where they released a film called Standing in the Shadows. In 2004 they went to perform at Grammy Awards where they also garnered a Lifetime Achievement Award.

In the course of his career, Bob Babbitt received several recognitions and scholarships. Some of the notable ones include the Lifetime Achievement Award, Bob Babbitt Day on 23rd, July among others. In 2001 Bob Babbitt’s health started to deteriorate where he was diagnosed with an untreatable brain tumor. He breathed his last on 16th, 2012 at 74 years of age.