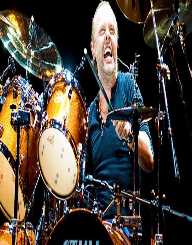 Lars Ulrich is an American-Danish musician. He was one of the founders of the Metallica, the famous heavy metal band. He belonged to a well-bred family of sports players, but he chose music as his calling. Although his father wanted him to venture into tennis as a young boy, he chose metal music as well as drumming as his choice. This interest in metallic music was geared at his first concert ever where he had the opportunity to watch live the performance of Deep Purple.

He, however, jammed other heavy metal musicians who changed his life for better. He became a successful metallic singer as time goes on. He is also the first Danish musician to be inducted into the Rock and Roll Hall of Fame.

Lars Ulrich was born on the 26th day of December 1963. At that time, he was born to Torben Ulrich who was a professional tennis player at that time. He was born in Gentofte, Denmark. Despite the fact that his father wanted him to play tennis, he almost prepared himself to be a tennis player one day.

However, at age 10, Lars Ulrich attended a life-changing concert with his dad. He got fascinated by the beating of drums as well as the Deep Purple concert. He then concludes that it is absurd to think of his father way of thinking. At age 16, he moved out to Los Angeles with his parents and started work on his passion. He later sent ad in the newspaper for people to employ him.

James Hetfield got in touch with him after he sent out and for jamming with metal musicians. In five months later, he formed Metallica. The band released their debut album and named it Kill Them All. Sooner, the band released Ride the Lightning. These albums had a lot to tell about their personality as well as their underground success as singers. Later on, the got their commercial famous in 1986 with their work, Master of Puppets. Tragedy struck as they lost their bassist during their tour for Master of Puppets. They did not allow that to discourage them and they kept making music upon music. The later made Justice For All, and this smashed the Billboard’s Top 10.

The nineties was a period of activity for Lars Ulrich as he was involved in so many musics making with his band. From albums like Metallica, Load, Reload to Garage Inc. All these albums are known for their immense success Metallica has. Later on, in the late 90s, he formed his record label Music Company while he was still a drummer for Metallica. Sooner, he is later venturing his anger on file sharing, and the band sued Napster. In 2003, he released St Anger and Death Magnet. He was also invited to a movie with Russell Brand as an actor. In the year 2012, he got a role to play in Hemingway &Gellhorn. A movie about the life of Lars was released in 2012 by the HBO movie. This movie was about a disabled man that manages to meet Metallica.

The founding of Metallica and the playing of the drum for the band was his most prominent work in his lifetime. Lars Ulrich had all his recognition as a musician from the popularity of his metal band.

Lars Ulrich seems to be a little bit unlucky with marriage. He married twice of which one was with Debbie Jones, an English woman whom she met on one of his tours in 1988. This had married for two years before it got broken down into pieces. He later married Skylar Satenstein in 1997 but got divorced in 2004 after seven years of marriage. The couple has two children – Miles and Layne. As at present, Miles is a drummer for the band My Missing Half. Between 2004 and 2012, he dated Connie Nielsen, a Danish Actress. He had two children with her and named them Sebastian and Thadeus.

Lars Ulrich got inducted into the Rock and Roll Fame with his band. He became the first Danish Musicians to be featured in the Rock and Roll Hall of Fame. While he was young, he got interested in the British heavy metal band, Diamond Head. He jetted out from San Francisco to London to see their live performance.