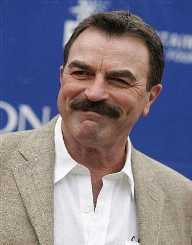 Thomas William Selleck is an accomplished and award-winning American actor and film producer. Born on January 29, 1945, he is best known for his role as private investigator, Thomas Magnum, in the television series Magnum, P.I. from 1980-1988. Making a film debut in Myra Breckinridge in 1970, Selleck has played roles in films like Three Men and a Baby, Three Men and a Little Lady, Quigley Down Under, Lassiter and Mr. Baseball. Selleck had a recurring role as Lance White in The Rockford Files.

He played the role of NYPD Commissioner, Frank Reagan in CBS’s drama Blue Bloods. Selleck has won numerous awards and honors for his contribution to the film industry.

Tom Selleck was born to Martha and Robert Dean Selleck on January 29, 1945, in Detroit, Michigan. Robert was an executive and real estate investor and Martha a housekeeper. He is of English descent. Selleck has three siblings Robert, Martha, and Daniel. At a young age, the family moved from Sherman Oaks, California. Tom Selleck attended Grant High School, graduating in 1962. After graduation, he received a basketball scholarship to enroll at the University of Southern California to study business administration. He played for the school’s men basketball team. He was a member of the Sigma Chi fraternity and the Trojan Knights.

While there, Selleck’s acting ability was identified by a drama coach who urged him to pursue acting. Going by the advice, Tom Selleck enrolled at the Beverly Hills Playhouse for an acting course and studied under Milton Katselas. Selleck was drafted into the California National Guard for the Vietnam War. From 1967 to 1973, he served in the California Army National Guard’s 160th Infantry Regiment.

Tom Selleck started his professional acting career by playing minor roles in movies like Myra Breckinridge, The Seven Minutes and Coma. He had made a debut TV appearance in 1965 as a college senior on The Dating Game.

He had a though beginning since he was a new face in the industry. In the 1970s he had a recurring role in The Rockford Files as a private investigator, Lance White. After years of playing minor roles, Tom Selleck had a career breakthrough by playing the lead character Thomas Magnum in the series Magnum, P.I. from 1980 to 1988.

He won an Emmy for Outstanding Lead Actor in a Drama Series in 1984. His performance gained him other roles starring in Daughter of Satan in 1972. Tom Selleck featured in the TV movie Concrete Cowboys along with Jerry Reed in 1979. Selleck’s other notable movies after Magnum, P.I. Include Three Men and a Baby, Runaway, Quigley Down Under, Three Men and a Little Lady and High Road to China. Others include An Innocent Man, Mr. Baseball, Her Alibi, Christopher Columbus: The Discovery and The Love Letter among several others. Tom Selleck started playing cowboy roles in Western movies due to his interest as a firearm collector and marksman.

His debut cowboy film was in The Sacketts in 1979. He played opposite Jeff Osterhage, Ben Johnson, Glenn Ford, and Sam Elliott. He followed it with others like The Shadow Riders, 1982, London in Lassiter, 1984 and Last Stand at Saber River, which won him a Western Heritage Award in 1997.

Tom Selleck played the role of Jack McLaren in the CBS sitcom The Closer in 1998, the Jesse Stone series in 2005 and Las Vegas in 2007. In 2010, he appeared as Frank Reagan in the CBS’s American police drama series, Blue Bloods. Selleck has done commercials for Right Guard deodorant, 1971, Farrah Fawcett, 1972, aperitif Dubonnet, 1977 and Close-Up. He also did commercial voice over for companies like AT&T, Florida’s Natural orange juice, and Coldwell Bankers.  American Advisors Group named him as the new national spokesperson on August 1, 2016.

Tom Selleck has been married twice first to model Jacqueline Ray in 1971. The couple adopted a son, Kevin Shepard born in 1966. They divorced in 1982. Tom Selleck then married second wife Jillie Mack on August 7, 1987. The couple welcomed their daughter, Hannah Margaret Selleck on December 16, 1988. The family lives on a 60-acre avocado farm in Thousand Oaks-Westlake Village, California. Selleck is an indoor and beach volleyball player. Tom Selleck plays for the Outrigger Canoe Club, Honolulu in the outside hitter position. He is also an avid fan of ice hockey and normally attends games of Kos Angeles Kings at the Staples Centre.