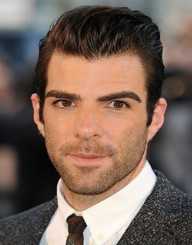 Zachary John Quinto, an American actor and film producer, was born on June 2, 1977, in Pittsburgh, Pennsylvania, United States. His father Joseph John ‘Joe’ Quinto was a barber. His mother, Margaret ‘Margo’ Quinto worked for an investment firm and at a magistrate’s office later on. He hailed from a mixed heritage as his father was of Italian ancestry and mother had an Irish origin.

When Zachary Quinto was only seven years old, his father died of cancer. He and his elder brother Joe grew up, raised by his mother. He attended Saints Simon and later the now-defunct Jude Catholic School. In 1995, he graduated from Central Catholic High School. After the unfortunate loss of his father early in his life, Quinto was drawn towards acting passionately. His father’s sad demise drove his ambition and resolve to become an actor. During his schooldays, he participated in their musicals and even won the Gene Kelly Award for Best Supporting Actor.

Zachary Quinto was associated with the CLO Mini Stars in several of their local Pittsburg production and performed in plays like ‘The Wizard of Oz’ and ‘Cinderella’ from an early age. His passion for acting led to his enrollment in the Carnegie Mellon University's School of Drama. In 1999, he graduated from the institute and moved to California the next year to pursue a career in professional acting.

Initially, Zachary Quinto had to be content with minor television roles, mostly guest appearances. His debut appearance on television was in the brief television series ‘The Others.’ He appeared in some more shows as a guest star like ‘Touched by an Angel,’ ‘Charmed,’ ‘CSI,’ ‘Six Feet Under’ and ‘Lizzie McGuire.’ Soon afterwards, he landed his first recurring role in the Fox Series popular drama ‘24’, where he depicted the character of Adam Kaufman, a computer expert. His role in the series started in 2003 and ended in 2004 after 23 episodes into the third season.

The publicity Zachary Quinto garnered from his performance in 24 facilitated his inclusion in two more significant T.V roles. The first one, ‘So NoTORIous’ was a popular VH1 series T.V show, based loosely on the life of Tori Spelling. Quinto played the role of Sasan, an overbearing, homosexual best friend of Tori Spelling. The second one, ‘Hero,’ a sci-fi T.V drama, gained extreme popularity among the viewers. The character of a mysterious villain, nicknamed serial killer Syler, was beautifully portrayed by Quinto in the drama. He started acting in the series in 2006 and continued for the next four seasons until the show’s cancellation in 2010.

In the 2007 Comic Conference, The Star Trek film franchise officially announced Quinto’s casting as the young Spock in the reboot of the acclaimed sci-fi series, J.J.Abrams directed iconic film ‘Star Trek’ (2009). His latest appearance in the series is the 2013’s ‘Star Trek Into Darkness.’ He continued to receive a steady flow of work in film and T.V. In 2011. He played the role of Dr. Oliver Thredson in the series ‘American Horror Story.’

Zachary Quinto also has to his credit some admirable work in the theatre circuit. In 2003, he performed in classics like ‘Beckett's Endgame’ at the Los Angeles Odyssey Theatres. Next, he did Shakespeare's ‘Much Ado About Nothing’ at the Los Angeles Shakespeare Festival followed up by ‘Intelligent Design of Jenny Chow’ at the Old Globe Theatre. He also featured in the off-Broadway production of Tony Kushner's ‘Angels in America’ at the Signature Theatre, New York City, where Quinto played the lead role of Louis Ironson from October 2010 to February 2011. He received the Theatreworld Outstanding Debut Performance award for his role in the show.

Zachary Quinto is a staunch supporter of the LGBT movement. He declared his sexual orientation in October 2011 after the suicide of bisexual teenager Jamey Rodemeyer due to gay bullying. Around the same time, he started a relationship with actor Jonathan Groff. The two broke up in 2013. He now lives with model and artist Miles McMillan in Manhattan area of New York City.

Zachary Quinto has been a part of projects like the Trevor Project, and It Gets Better Project which is an Internet-based campaign targeted towards spreading awareness amongst LGBT youth and preventing them from committing suicide. He was also a part of Barack Obama’s campaign ‘Obama Pride: LGBT Americans For Obama.’