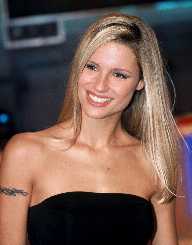 Michelle Hunziker is a famous Swiss TV presenter, actress, singer, and model. She is a well-known celebrity in Italy for her TV shows, modeling, and acting. With help from Riccardo Gay the first agent who recognized her talent, she was able to begin her modeling career at such a young age. She was born in Switzerland but moved to Italy with her mother when she was 16. It didn’t take her long before she started appearing in renowned brands such as Rocco Barocco, Armani, and Colmar.

She also got the eye of many fashion industry internationally especially because of her flawless figure and her outgoing nature. Hunziker has hosted several Italian and Germany shows and also acted in many movies.

Michelle Hunziker was born on January 24th, in 1977. Her place of birth was Sorengo. She was the only child of Rudolf Hunziker and Ineke a Dutch. Her father was skilled in painting but worked as a hotel manager. He was German-speaking. He died in 2001 following a heart attack. When Hunziker was six, her family relocated to Ostermundigen. This is where she began her elementary studies in 1983. Unfortunately, her parents divorced, and she was forced to move with her mother to Solothurn.

Michelle Hunziker was only 17 when her career journey began. She hosted Paperissima Sprint a TV series in 1990 and later in 1992 co-hosted Scherzi a parte another TV series. She later hosted the TV series Cinderella during the late 90s which was quite a success. This made her more famous, and since then many producers wanted to a piece of her work.

In 1996 She appeared in misteri di CascinaVianello while hosting the TV show Rai Uno. She was the lead actor in La Forza dell’Amore in 1998. A year later she stared at a documentary film The Protagonist. In 1999 She co-hosted Michael Jackson and Friends a renowned show while featuring at Voglio stare sotto al letto an Italian movie.

Michelle Hunziker forged on with her TV hosting even in the 20th century and in 2006 she ventured into singing. Her first album was Lole which featured singles like Someone Else and From noon till midnight among others. She also appeared in hit musicals in Italy such as Cabaret and The Sound of Music.

She received the Italian TV Oscar award in 2001 under the category of Discovery of the year and in 2007 co-hosted Festival di Sanremo an Italian song contest. This was a worldwide contest.

In 1998 Michelle Hunziker was married to Eros Ramazzotti, an Italian singer and divorced in 2002. They had a daughter Aurora Sophie born December 5, 1996. After her separation, Michelle Hunziker was with Luigi De Laurentiis Jr, a famous producer. Later in 2013 she got engaged to Tomaso Trussardi, the heir of Trussardi. Together they have two daughters Sole and Celeste