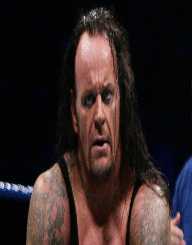 The Undertaker is a legendary figure in the world of professional wrestling. For more than 25 years, he has been in the ring, knocking down opponents, and making the crowd go wild and wanting for more. His gimmicky dead man persona has been projected as the nightmare of many wrestlers for the most of his wrestling career. He is a four-time WWE champion and three-time World Heavyweight Champion.

When the bell rings, and the lights go out, the wrestler knows it, the audience knows it, and you know it…the Dead Man’s in the ring!

The Undertaker was born as Mark Callaway on March 24, 1965. His birthplace is Houston, Texas. The youngest son of Frank and Catherine Callaway, he has four older brothers – David, Michael, Paul, and Timothy.

Mark Callaway attended the Waltrip High School from where he graduated in 1983. After that, he went to the Angelina College, Texas on a sports scholarship. In 1985, he went to the Texas Wesleyan University and played basketball. Of a giant build at 6’11’’, Callaway was athletic from childhood and played in his school’s basketball and football teams.

Mark Callaway dropped out of college in 1986, to pursue a professional sportsman career.

Mark Callaway first speculated on becoming a professional basketball player, but soon changed his mind towards wrestling. Since making his debut in 1984, he has enjoyed a highly successful career in wrestling.

Mark Callaway first appeared in the WCCW (World Class Championship Wrestling), under the name Texas Red. Right from his early career, he took on different personas when performing in the ring. His tall and muscular body along with his scare tactics earned him quite a reputation early on. Callaway won his first professional wrestling championship against Jerry Lawler in 1989. He invented the Master of Pain persona during this time.

Coming to the WWF

In 1990, Mark Callaway was featuring as Mean Mark Callous in World Championship Wrestling. His talent in the ring caught the eyes of Vince McMahon. Soon he was signed for the WWF (World Wrestling Federation).

The Undertaker has been featured in many storylines and feuds in the WWE history. His first appearance in the 1990 Survivor Series was under the name Kane the Undertaker, which was then trimmed down to just The Undertaker – a name immortalized in the history of the WWE by Callaway.
In 1992, he was portrayed as a good character, in his feud against Jake the Snake Roberts, but had to take a break from wrestling due to an injury in 1993.

After his return, The Undertaker defeated Yokozuna in a casket match. During the 1994-1998 period, he feuded with Diesel, Mankind, and Shawn Michaels. The feud with Mankind ended when the Undertaker, was buried alive in a match. This was the second break in his career, to recover from an injury.

Another WWE wrestler was given the name Kane and presented as the Undertaker’s half-brother. Together, they are known as the Brothers of Destruction.

During 1998-1999, The Undertaker had undergone hip surgery, and so, the Undertaker appeared as the leader of the Ministry of Darkness where his minions would wrestle. He did not participate in the action himself. The year 2007 brought the Undertaker his first Royal Rumble win. By this time his undead persona had fully evolved, and he had developed an enormous fan following.

The Undertaker’s favourite moves include the Choke slam and the Tombstone Pilerider.

The Undertaker is known for his streak, i.e., 21 straight wins at WrestleMania. For 21 years, he was undefeated at the WrestleMania event.
The streak ended in 2015 when Brock Lesnar defeated him. Everywhere, the viewers were in a shock. However, he again won at the next Wrestlemania event.

The Undertaker is widely regarded as one of the greatest wrestlers in the world. And the greatest wrestler in the history of the WWE.
For more than 25 years, he has been the crowd favourite and successfully carried on a mystic, demonic avatar that sets him apart from the rest.

The Undertaker has appeared in a few films mostly as himself. This includes Suburban Commando, The Flintstones & WWE, Scooby Doo & WWE and Surf’s Up 2.

Mark Callaway has been married three times. His first marriage was to Jodi Lynn in 1989. They had a son named Gunner. The couple separated in 1999.

One year later, Callaway married Sara. Her name is tattooed on his throat. He has two daughters from this marriage – Gracie and Chasey. The marriage ended in 2007.

In 2010, The Undertaker married Michelle McCool, a former professional wrestler. They were blessed with a daughter Kaia in 2012.