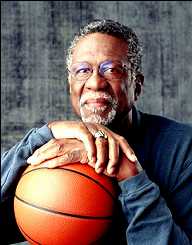 Bill Russell was born on February 12th, 1934. His place of birth was in West Monroe, Louisiana in the United States. Russell is praised as one of the best basketball players of all time. Back in the day, Russell played for the University of San Francisco and helped them clinch NCAA titles from one season to the other. After graduating from the university, he began his professional career by playing for Boston Celtics. During his time as the club, he played an essential role in ensuring that his team won up to 11 titles. His performance at the court earned him recognition as the Most Valuable Player for five times. Following his remarkable performance as a basketball player, Russell retired in 1969. Six years later, he earned himself a spot at the Naismith Memorial Basketball Hall of Fame.

William Felton Russell was born on February 12th in 1934. He was the son of Katie and Charles Russell. During his early life, Bill Russell struggled in his life as he faced some challenges including health issues. For instance, during this period, racism was rampant in West Monroe, and his family had to fight this. His health also affected him greatly as he suffered from different illnesses. At the age of 10, Russell’s father opted to migrate with his family to a new location where they would not be despised due to their race. They, therefore, moved to Oakland, California. It is at this location that his father got employed in a shipyard. However, the Russells family went through a huge challenge after Bill’s mother passed away in 1946. At this time, Russell was only 12 years old. The death of his mother motivated Russell to take his studies seriously and strive for a brighter future.

Outside of class, Russell became an active basketball player. Things were not easy for him as he struggled to find a reliable playing position while playing with McClymonds High School. Regardless of this, his performance improved when he was in his senior years. This earned him playing time with his team. Russell’s 6'9" height gained him an advantage over other players. It is for this reason that he also brought himself attention from other basketball clubs and universities. In 1952, he was fortunate enough to land himself a scholarship with the University of San Francisco.
While playing for the University of San Francisco, he helped them in winning NCAA titles consecutively in 1955 and 1956. His defensive style of play and the ability to easily win rebounds made him an important player in court. On average, he scored 20.7 points and won 20.3 rebounds. Russell concluded his amateur career in 1956 after playing for the men’s basketball team during the Melbourne Olympics. His team bagged home a gold medal during this competition.

During the same year, in 1956, St. Louis Hawks signed a deal with the Boston Celtics that would transfer Russell’s draft rights to Boston Celtics. Red Auerbach had eyed Russell’s talent and claimed that he would complete his team. The following year, Russell proved to be a great asset for the Boston Celtics as he played in the middle. The team went ahead to break records during the 1957 season. Surprisingly, Boston Celtics also bagged the title after defeating St. Louis Hawks. This was just the beginning of a groundbreaking record for the Celts. In 12 years that they played, the team went to NBA Finals for 11 times and emerged winners in 10 of them.

Personally, Russell was also making a name for himself. He was recognized as the Most Valuable Player for five times during his play with the Boston Celtics. He was also ranked as second behind Wilt Chamberlain regarding the rebounds (21,620) that he made. In the 1966 season, Russell’s coach, Auerbach retired. Russell took up the challenge of leading his team to clinch their eighth consecutive title. He played as a player and also worked as a coach for the team and together they won two additional titles in the years 1968 and 1969.

After playing in 1969, Russell also capped his professional basketball career as a player. He did not move away from the basketball arena entirely as he came back coaching and acting as an executive. Unfortunately, his team’s performance dwindled after he left. During the late 80s, Russell took over the position of the president for the Sacramento Kings.

Bill Russell has tied the knot for three times. His first marriage was to his college sweetheart named Rose Swisher. They were in a relationship for 17 years. Russell later married Dorothy Anstett, a relationship that lasted for only three years from 1977 to 1980. His third marriage was to Marilyn Nault in 1996, and it came to an end in 2009. Russell had three children from his first relationship with Rose. They are called Karen, Buddha, and Jacob.