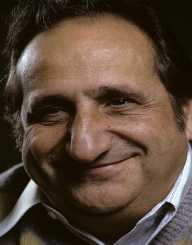 Albert Francis “AI” Molinaro was an American actor and former real estate agent. Born on June 24, 1919, he is rolesAIDelvecchioin the television sitcom Happy Days and in The Odd Couple as Officer Murray Greshler. Molinaro also did several TV commercials including for On-Cor frozen dinners.

Albert Francis Molinaro was born in Kenosha, Wisconsin to Italian immigrants Teresa and Raffaele Molinaro. He was the ninth of ten children by his parents. His father was an affluent entrepreneur who owned restaurant and hotel owner. He was also the leader of the Kenosha Italian community and personally sponsored several Italians to move to the US. Molinaro is the brothers of George Molinaro who for 30 years served in the Wisconsin State Assembly and Joseph Molinaro, the longest-serving district attorney of Kenosha County. Molinaro discovered he was a good public speaker while in school, nonetheless, he was not a good student and struggled with his studies. He had to spend one more year in high school due to bad performance.

With his strong desire for fame, Molinaro left home to Los Angeles in 1940 to pursue an acting career. Life in Los Angeles and the fame he was seeking for did not come at hand, hence, he permanently moved to California, where he picked several odd jobs. He was able to save enough through these jobs and therefore started a collection agency. Molinaro later sold his business to venture into real estate speculation in Southern California. He achieved great success with this business and the money he earned from it propelled him to pursue his dream, acting.

Molinaro enrolled in an acting course in the 1970 and that earned him some minor roles in some television sitcoms including That Girl, Bewitched, Green Acres, and Get Smart. He had a big break with his role in the television sitcom, The Odd Couple, 1970, as officer MurryGreshler. The sitcom that ran until 1975 also starred others like Tony Randall and Jack Klugman. His next role was as AI Delvecchio in the sitcom, Happy Days in 1974. The sitcom ran on ABC for 11 seasons and 255 episodes ending in 1984 but he left in 1982 after 146episodes. After leaving Happy Days, he featured in the TV pilot, The Ugily Family, 1982.

Molinaro and Anson Williams, a fellow cast member of Happy Day, collaborated to open a chain of eateries called Big AI’s in 1987. In 1990, he received the role of Joe Alberghetti in the CBS sitcom The Family Man but was canceled after the first season. From 1985 to 2008, he served as a frequent guest on the nationally syndicated radio show, Don and Mike Show. He retired from active acting in the early 1990’s but continued to do television commercials until the early 2000s.

AI Molinaro married Jacqueline Martin in 1948. The couple had a son Michael. The marriage ended in a divorce. He then married Betty Farrell. Molinaro died on October 30, 2015, at the age of 96 in a Glendale, California, hospital.