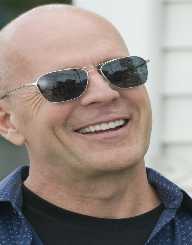 American actor, producer, and singer Walter Bruce Willis was born on March 19, 1955, in Idar-Oberstein, West Germany. His father was an American soldier, who met his mother while serving in Germany. He is the oldest of 4 children. In 1957, his father was discharged from the army and went back to the States, to New Jersey.

After the war, his mother worked in a bank, but his father was a welder and mechanic. Willis went to Penns Grove High School. During his time at school, Willis had a stutter. He later found out that it is easier for him to express on stage and started performing. During high school years, Willis was the president of a student council and drama club.

After high school, Willis worked as a security guard at Salem Nuclear Power Plant. He also worked as a private investigator until he turned to acting. He enrolled at Montclair State University but left school to pursue an acting career and moved to New York.

In New York, Bruce Willis was working in a bar to support himself. He then decided to move to California to audition for several TV shows. He appeared in shows like Miami Vice and The Twilight Zone.

Bruce then auditioned for the drama series Moonlight. He was cast as David Addison Jr. The show lasted for five seasons and won Willis an Emmy Award for Outstanding Lead Actor in Drama Series, as well as a Golden Globe. After his TV show success, Willis became the pitchman for Golden Wine Cooler products, a campaign that earned him $7 million in two years.

Bruce Willis’ first lead film role was in 1987’s Blind Date. He was also cast for the ‘88’s Cowboy. Willis’ big breakthrough was in the 1988 action film Die Hard, starring as John McClane. The role was majorly successful and grossed almost $140 million worldwide. Die Hard turned into a five-movie franchise, with Willis in the lead role. After this, he was also the voice of the baby in Look Who’s Talking and starred in the drama In Country.

In the 1980s, Willis recorded a pop-blues album The Return of Bruno, which was moderately successful.

In the 1990s, Bruce Willis starred in 3 more Die Hard films, as well as in other projects. His career suffered a downfall, after starring in several unsuccessful projects. In 1994, Willis starred in Quentin Tarantino’s Pulp Fiction and since then has worked on several more projects with him. Willis also starred in the hit movie Fifth Element in 1997.

Bu the end of the 90’s, his career had fallen in another slump, with projects like The Jackal and Breakfast of Champions, which were poorly received by the critics. He made a comeback in 1998 starring in the Michael Bay’s Armageddon, which was the highest grossing film of the year worldwide. The following year he starred in The Sixth Sense, which was also highly successful.

In 2000, Bruce Willis won an Emmy for his appearance in the hit series Friends. For his role, he was also nominated for American Comedy Award. In 2001, he was cast as Terry Benedict in Ocean’s Eleven but dropped out to work on his record. Since then he has starred in several films, as well as appeared in TV programs. He made his Broadway debut in 2015’s adaptation of Misery by Steven King.

Awards and Other Ventures

He was a co-owner of motion picture production company Cheyenne Enterprises from 2000 to 2007. In 2009, he became the international face of Belvedere SA’s Sobieski Vodka. He owns 3.3% of the company.

Bruce Willis married actress Demi Moore in 1987. The couple had three daughters. In 1998, the couple announced their divorce, which was finalized in 2000. Willis has a close relationship with Moore and her third husband, Ashton Kutcher.