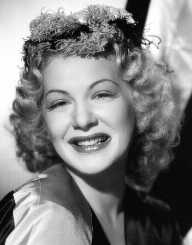 Actress and singer Betty Hutton was born Elizabeth June Thornburg in Battle Creek, Michigan on the 26 February 1921 to Percy Thornburg, a railroad brakeman,  and Mabel Lum. She had an older sister Marion. When she was two years old, her father abandoned the family, and her mother raised her two daughters on her own.

In search of work, Hutton’s mother moved to Detroit where she worked in the car factories. She also ran an illegal tavern, known as a speakeasy. The family lived in some poverty and Hutton’s mother was also an alcoholic. Hutton did not hear news of her father. She was advised of his suicide when she was 18.

Betty Hutton showed talent as a singer at a young age and used to sing in various school productions. By the age of 13, she began singing with bands in the Detriot area.

At age 15, she went to New York using $200 she had saved, but it did not work out, and she returned home. In the late 1930s, Hutton was introduced to Vincent Lopez by her sister Marian and began singing in his band. The band was popular in Detriot and on the local radio.

Betty Hutton relocated to New York in the late 1930s. Her first professional gig in New York City was with Lopez at Billy Rose’s Casa Manana Club (1938). She recorded the song Igloo, with the bandleader of RCA Victor’s Bluebird Records and The Jitterbug as well as a duet, Concert in the Park, with Sonny Schuyler.

She was heard on NBC radio’s Theater Guild on the Air in Daisy Mayne and Page Miss Glory. She signed with RCA Victor Records and recordings included Can’t Stop Talking, Orange Coloured Sky and A Bushel and A Peck, the latter a duet with Perry Como. Other work included  The Greatest Show on Earth (1952), Somebody Loves Me (1952) and Spring Reunion (1957). In the 1950s she was also on television in Satins and Spurs (1954), and she had a television series The Betty Hutton Show (1959). Hutton was also on the radio doing a comedy and singing routine on The Bob Hope Show.  For the rest of the 1950s, Hutton appeared at the London Palladium for three weeks (1952), and the performed on the nightclub circuit.

After Betty Hutton married the choreographer Charles O’Curran, she insisted that he be the dance director in her next film, Topsy and Eva starring alongside Ginger Rogers. When Paramount refused the request, she broke her contract which still had a few months to run. Paramount responded by cutting Hutton out of all planned productions and replacing her with Rosemary Clooney.

Betty Hutton had problems with alcohol and prescription drug abuse which got worse after her divorce from Pete Candoli in 1967. She also had the stress of having lost her mother in a house fire in the early 1960s. She had a nervous breakdown, a suicide attempt and had to declare bankruptcy. She found meaning in life again with the help of Father Peter McGuire and converted to Catholicism.

In the 1970s, a journalist reported that Betty Hutton had a job as a cook in a rectory in Portsmouth, Rhode Island. Her Hollywood supporters organized a benefit in 1974 and raised $10,000.

In 1942, the Motion Picture Herald named Betty Hutton as a Star of Tomorrow. She appeared on the cover of Time Magazin in April 1950. Photoplay Magazine named her the year’s most famous actress for Annie Get Your Gun (1950). Hutton was given a star on the Hollywood Walk of Fame in 1960.

Her fourth husband was Pete Candoli (m.1967 - div.1967). They had a daughter, Carolyn (b.1961). In later years she had a fractured relationship with adult daughters.

Late in life, she went to university and obtained an MA in psychology from Salve Regina University, Rhode Island. Hutton spent her final years in Palm Springs where she died of cancer on the 12 March 2007 at the age of 86.