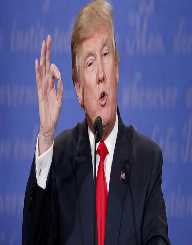 As a teenager, Donald Trump attended the New York Military Academy. While there, he spent much of his time playing sports. After graduating from this school in 1964, Trump went on to attended the Fordham University. After attending this school for two years, he ended up transferring to the Wharton School of Business at the University of Pennsylvania. He later graduated from this school in 1968 with a bachelor’s degree in economics.

One of the things that Donald Trump is most famous for is his involvement with the real-estate business. He first began working in real-estate while still in college. He worked with his father at his family’s company: Elizabeth Trump and Son. This company focused on real-estate within New York.

Donald Trump’s early real-estate ventures of the 1970’s and 1980’s were successful. He even took over the family business in the late 1970’s and renamed the company the Trump Organization. He was most famous for buying hotels are this time. Some of the hotels around this time were the Plaza Hotel and the Barbizon Hotel. However, poor business decisions led Trump’s business to lose more money than he earned. By 1989, he had declared bankruptcy.

In the early 1990’s, Donald Trump gained back some financial stability. He had enough money that he could finally open the Taj Mahal Casino, which was a project that he had been planning for years before. Income from his casino helped to fund many other purchases during the 1990’s, including the Miss Universe Organizations.

The 2000’s continued to be a productive time for his real-estate career. It was in 2001 that his home, the famous Trump Tower, was completed.

In 2009, Donald Trump took on a new business opportunity when he bought the WWE RAW show from the former longtime owner, Vince McMahon. Since then, Trump has been at many RAW matches, and he sometimes comments on the matches.

Other than his real-estate ventures, Donald Trump has made his way in the business world by branding various products with his namesake. Some of his branded products include Trump Restaurants, the Donald J. Trump signature collection, Donald Trump

S Real Estate Tycoon, and the Trump board game.

Donald Trump has been involved with television and film both as an actor and producer. He first began acting in the early 1980’s. By this time, he was already famous for his business ventures. This was part of the reason why he was involved with television and film in the first place. He first began his acting career on The Jeffersons in 1981 when he played himself in an episode. He played himself again on this show a few years later.

In the 1990’s, Donald Trump continued to have cameo roles in various movies and television shows. In all of these films and shows, he continued to play himself. Some of the shows and films he appeared in during this decade include Home ALone 2, The Little Rascals, The Nanny, Suddenly Susan, The Drew Carey Show, Spin City, and Sex and the City.

It was in 2008 when Donald Trump began his biggest television project: The Apprentice. This show is a competition in which wannabe business stars compete for the chance to work with Trump. This show has about 15 episodes per season. The most recent season of the show was released in 2017.

Since the early years of the 2010’s, Donald Trump has shown interest in wanting to become a politician. He mused over the idea of running for governor of New York, but he eventually raised his goals higher, aiming to become the president of the United States. He first announced his candidacy for president in 2015.

The build up to the election was fraught with ups and downs for Trump. His platform was greatly varied, which made him stand out against the rest of the Republican candidates. He advocated for many changes, including barring certain groups of immigrants from entering the United States (mostly Muslims and Mexicans), repealing the Affordable Care ACT (ACA), and supporting the right to gun ownership, but wanting to deny the right to safe abortions. His ideas were controversial, but he still won the election, even though he earned less than 50% of the popular vote. He then officially took office on January 20, 2017.

As president, Donald Trump has kept with this word, and he is trying to do most everything that he promised to do while he was running for president. Since he has been president, he has been working to build a wall on the border of the United States and Mexico. He has also been trying to repeal and replace the ACA, but efforts to do this have so far been unsuccessful; many Americans consider the failure of the repeal to be a good thing, as if it went through, millions of Americans would lose affordable access to healthcare.

The building of another major oil pipeline, a travel ban for several “Muslim” countries in the middle east, the leaking of government files, and various other scandals have also affected the way that Americans, and the rest of the world, view Trump as a president.

As Trump’s president continues, he also continues to lose support with many of the people who voted for him, and even with those who did not vote for him in the first place. His current general approval rating is less than 50%. It is even lower among Democrats, women, and minorities.

Over his long career, Donald Trump has “written” several autobiographical works. “Written” in this sense means that these books were most likely ghost-written by another author who Trump paid to write for him. Some ghost-writers have come forward saying that Trump did not write all of his books. Some of the books Trump has written/has claimed to have written are listed below.

Trump: The Art of the Deal
Trump: How to get Rich
Trump: Surviving at the Top
Think Like a Champion
Think Big: Make it Happen in Business and Life

Donald Trump’s awards vary greatly since he is involved/has been involved in so many groups and activities. Some of his most impressive awards are listed below.

Over the years, Donald Trump has been involved in numerous scandals. One of his most famous scandals was Trump University. This was a university that Trump started himself. It was a for-profit business school. It was not long before this school was accused of fraud and involved with several lawsuits. The matter was brought to trial. Trump ended up losing the case.

Donald Trump has had a track record of having troubles with taxes as well. He has been audited before, and during his run for the presidency, many people wanted to see Trump’s tax returns to have proof that he wasn’t cheating the IRS.

Donald Trump has also been accused by numerous women of sexual harassment, which ranged greatly in severity. Trump is known to be sexist and to make negative remarks about women. Some of these remarks superficially insult a woman’s appearance. Some of his other offenses include verbally sexually harassing women, as well as groping them.

It is also suspected that Russia had something to do with Trump getting elected. Russians hacking the election is one of the reasons why Trump could have won the election. Although, this is still under debate.

Donald Trump was first married in 1977 to Ivana Zelnickova. This couple had three children together: Donald Jr., Eric, and Ivanka.  However, this marriage ended in divorce in 1992. He soon after married Marla Maples in 1993. Two months before the couple was married, they had a child together, Tiffany Trump. This marriage too ended in divorce in 1999. Donald Trump married for the third time to his current wife, Melania (Knauss) Trump. This couple has one son together, Barron.