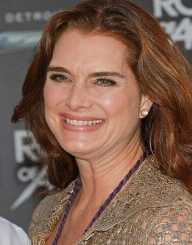 Brooke Christa Shields is an Actress, Model, and former child star. Her debut role was at age 13. She played the role of Violet in the highly controversial 1978 movie Pretty Baby. Although she has played other roles both films and sitcoms, it seems this is the role she is most associated with.

Brooke Shields was born in Manhattan, New York on May 31, 1965, to Frank and Teri Shields. Brooke’s paternal grandmother was an Italian princess. When Teri got pregnant, Frank’s family paid her to terminate the pregnancy but she kept the money, and they had Brooke. Eventually, when Brooke was five months old, Frank and Teri got a divorce.

When Brooke was five years old, her mother expressed her interest in getting her on television because of her beauty. She began to take ballet, piano and riding lessons as a little girl. Her debut into entertainment was at age 12 when paparazzi kept taking pictures of her at the Waldorf Astoria, New York.

Brooke Shields went to New Lincoln School until the eighth grade. She was then transferred to Dwight-Englewood School, New Jersey which was where she graduated from in 1983. In 1987, she graduated from Princeton University with a degree in French Literature. Her graduate thesis was called “The Initiation: From Innocence to Experience: The Pre-Adolescent/Adolescent Journey in the films of Louis Malle, Pretty Baby, and Lacombe Lucien.”

Brooke’s modeling career took off when she was only 11 months old, and it was for Ivory soap. Her agent was Eileen Ford, and she was a successful child model. In 1978, she starred as a child prostitute in Louis Malle’s movie, Pretty Baby.

In 1980, Brooke Shields became the youngest fashion model to appear on the cover of Vogue. In the same year, she was seen in the controversial TV and print ads for Calvin Klein’s Jeans. This ad helped in making Calvin Klein a force to reckon with in the design industry.

By the age of 16, she was known around the U. S. because of her status as model and movie star. She has also starred in Wanda Nevada, but her best-known movies include The Blue Lagoon produced in 1980 which included nude scenes of adolescent lovers on a tropical island. She later testified in court that adult body doubles were used to shoot some of the views.

Another quite notable movie is Endless Love, a 1981 film which was initially X rated but later edited in an R rated movie. Brooke Shields also played a Lesbian in the 1998 movie, “The Misadventures of Margaret” and in 2001, she played a true life story of a lesbian couple battling with the adoption laws in Florida in the movie, “What makes a family.” She has also appeared in various sitcoms like Suddenly Susan, The 70s Show amongst others. She was the youngest star to ever appear in The Muppets Show and 1981; she was the youngest host of ABC’s Fridays, a comedy show like Saturday Night Live.

Brooke Shields has also performed in many Broadway productions, like the 1994 revival of Grease as Betty Rizzo, the 1998 revival of Cabaret, as Morticia Addams in the 2001 Broadway Musical of The Addams Family amongst others.

Brooke Shields had a very controversial childhood. Much of it involves child nudity portrayed in some of the movies she appeared in especially in Pretty Baby.  Also in 2009, an exhibition put up a picture of a 10-year-old naked Brooke, and it caused a fight. They were asked to pull it down by the police.

The single line attached to her Calvin Klein ad in 1980 caused more than a bit of stir. The innuendo-filled statement ‘Do you know what comes in between my jeans’ came with the ad while Brooke Shields was only fifteen.

Brooke Shields was a close friend of Michael Jackson, and he claimed that they dated for a while. She shared a tearful eulogy at his funeral.

She married Andre Agassi, the professional tennis player in 1997. They had been dating from 1993, however in 1999; she got an annulment for the marriage.

She eventually married television writer Chris Henchy in 2001 after they met by a mutual friend in 1999.  They have two daughters and live together in Manhattan.

Brooke believes that physical fitness is an extension of femininity and that both femininity and athletics are compatible. She’s the spokeswoman for Tupperware’s Chain of Confidence SMART girls guide which assists in helping girls develop their mental and physical health.

She’s an active animal rights activist and a vegan. She has written five books covering her early childhood and movie making, to finding herself to her postpartum depression and her relationship with her mother.

Brooke Shields won the People’s Choice Award for “Favorite Young Performer” from 1981 to 1984.

She has however not always enjoyed positive awards. She has won four Golden Raspberry Awards for worst actress and supporting actress. These were for her roles in, the Blue Lagoon (1980), Endless Love (1982), Sahara (1983) and Speed Zone (1989).

This however paled in comparison to the two Golden Globe Awards Brooke Shields received in later years. These were for her role in television series, Suddenly Susan between 1996 and the year 2000.