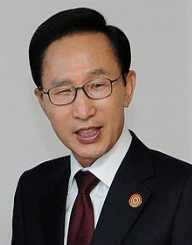 Lee Myung-Bak is a businessperson and former South Korean president from 2008 to 2013.

Lee Myung-bak was born in Osaka, Japan on December 19, 1941, during the liberation of Korea from Japanese occupation. His parents moved to Japan in 1929, when Korea was a part of the Japanese occupation of Asia. He grew up in rural poor life. His father worked as a farm hand, while his mother was a housewife. Myung-bak was the fifth child in the family of seven siblings.

He returned to Korea in 1945. They settled in their ancestral home in Pohang on the American side of the divided Korean peninsula. The Soviet administered Korea became North Korea. He enrolled at an informal night school since his parents could afford the formal school system. After his graduation from Dongji Commercial High School, he was admitted to Korea University on a scholarship.

During his stay at the university, Myung-bak became involved in student politics. In 1964 he became the president of the college’s student council. He led the students in public demonstrations against the government. He was arrested and charged with leading open defiance against the government. He was convicted and sentenced to three years in jail, with a five years’ probation after that. He served for over two months and was pardoned.

In 1965 he graduated from the University of Korea. Myung-bak enlisted in the military and was denied entry. He failed a health test at the Nonsan Training School. He entered the corporate world as an employee of Hyundai Construction. He was transferred to Thailand to work in a monumental highway project. After the completion of the project, he returned to Korea. He became the head of the company’s heavy machinery division in the capital Seoul.

Myung-bak became a smart engineer and leader. In 1970, just five years in Hyundai, Myung-bak became a director. He was 29 years and the youngest director of the company. Six years later in 1976, he became the Chief Executive Officer at Hyundai Construction Company. He became the chairman of the entity in 1988. Myung-bak was just 47 years.

He spent 27 years at the construction company. During his time as CEO and chairman, Hyundai construction got gigantic contracts in Asia. Apart from the highway project in Thailand, it embarked on other projects aided by the Korean government. They went into Vietnam and other neighboring countries. Myung-bak spearheaded the entry of the company in Saudi Arabia, the United Arab Emirates, and Bahrain.

Myung-bak left Hyundai Construction Company in 1992 after 27 years. He went into active politics. He became a member of the Democratic Liberal Party. He was elected into parliament soon after. He lost in the nominations of the Seoul Mayoral ticket in the Democratic Party in 1995. He regained his parliamentary seat in 1996 in a representative district in Seoul.

In 1998 Myung-bak braved an election scandal. His former associate alleged that Myung-bak violated election laws by using taxpayer’s money to fund his campaign. Myung-bak resigned from his seat and paid affine of USD 6.5 million.

Myung-bak ran for office again in 2002. He won the Seoul mayoral seat. He served in the office until 2006. As the mayor, Seoul co-hosted the FIFA World Cup with Tokyo. He restored all recreation centers with modern amenities, improved road network and expanded the rapid transit buses.

He campaigned on a platform of improving the economy and improving relations with North Korea. Myung-bak won the December 2007 presidential elections with 48.7% of the total votes. His campaign was marred with allegations of bribery and other malpractices.

Myung-bak instituted major reforms in the education sector. He introduced scholarships and English classes for rural schools in Korea. He reversed his idea of having the Korean syllabus being taught in English after heavy opposition. He increased the social welfare to cater to the underprivileged in society.

He commissioned the Grand Korean Waterway. He managed to increase the water supply both domestically and industrially. He negated on the construction of the Kyongboo Canal after opposition from the Buddhist clergy.

On the diplomatic front, Myung-bak was very pro-American in his inclination. He favored more trade imports from the US. He improved relations with the Asian Tiger countries, Russia, Japan, and China. Despite criticism at home, Myung-bak got international acclaim in meetings for his progressive model of governance and trade deals. He raised regional tension by demanding that Japan apologizes for the atrocities committed to the Korean nation during the occupation period.

Myung-bak faced criticism for his bias in the cabinet and other presidential appointments. He was accused of appointing politicians from his southeastern stronghold.

Myung-bak was associated with land grabbing, funds embezzlement, bribery, abuse of power and tax evasion. In 2008, he became a target of police investigators. On March 22, 2018, he was arrested on bribery charges. He allegedly received USD 43 million in bribes and other handouts from domestic and other multinational companies.

He was charged in court and found guilty of the charges. On October 5, 2018, Myung-bak was sentenced to 15 years in jail and fined USD 11.5 million.