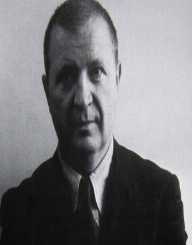 Adolph Reinhardt was born on December 24, 1913, in Buffalo, New York, USA. He also had a brother named Edward Reinhardt.

While in elementary and high school, Reinhardt’s talent in art was obvious. He excelled in the field and even won prizes for some of his artwork. Ad Reinhardt was also talented in his other school subjects, which earned him high grades. At the end of his high school career, he was offered several scholarships.

Ad Reinhardt attended Columbia University with a scholarship, but not to study practicing art (as he thought he knew everything he already needed to) and instead studied the history of art. Also while at this school, he worked for the school’s paper, The Colombian Jester. He mostly drew comics for this paper. He graduated from this school in 1936.

After finishing his formal education, Ad Reinhardt went on to study at the American Artist’s School. Here, he studied with other famous artists, like Carl Holty and Karl Anderson. It was while here that he moved away from doing traditional art and began painting in an abstract style, which is the style he is now most famous for.

In 1946, after taking a long break from his formal education, Ad Reinhardt joined New York University in the Institute of Fine Arts to earn a postgraduate degree.

In 1936, Ad Reinhardt worked for the Works Progress Administration’s Federal Art Project. While working on this project, he met some other artists, like Stuart Davis. He also made paintings for the 1939 World's Fair. He stopped working for this project in 1940. Also around this time, he worked as a freelance artist.

In 1937, Ad Reinhardt joined the American Abstract Artists group. He was sponsored by one of the artists he had studied under, Carl Holty. With this group, he put his art in exhibits around the country. Many of this paintings in these exhibits were made up of basic shapes and colors, but as time went on, the paintings became more abstract.

In 1942, Ad Reinhardt began working with Picture Magazine, which was a newspaper. He made the comics for this paper. He also took part in several art exhibitions in this year.

In 1943, Ad Reinhardt had his first solo exhibition in New York City. Later on in this year, he was a part of several other exhibitions. One of the main people who he shared exhibits with was Betty Parsons.

In 1945, Ad Reinhardt was drafted into the United States Navy to fight overseas in World War II. He only fought in the war for a short time, as the war ended in 1946.

After the war, Ad Reinhardt resumed working for Picture Magazine. Also beginning in this year (1946) he began having yearly exhibits with Betty Parsons, which he would continue to do until 1965. He only worked here until 1947. In the same year, he began working at Brooklyn College as an art teacher. He would go on to work here for the rest of his life.

In the 1950’s, Reinhardt’s art style began to change. It was around this time that he began to work on this “black” paintings. These paintings look plain black from far away, but as the viewers got closer to the painting, it was clear to see that it was made up of many different colors.

In the later years of his careers, Ad Reinhardt took on writing about art. He wrote about his art, as well as the art of others. Many of his essays were not published until after his death. Many of his most impressive writings are compiled in the book Art as Art: The Selected Writings of Ad Reinhardt, which is edited by Barbara Rose.

Ad Reinhardt married Rita Ziprkowski in 1953. The couple had one daughter together, Anna. The couple remained married until Reinhardt’s death.

Ad Reinhardt died on August 30, 1967. The cause of his death was a heart attack. He was only 53 years old when he passed away.